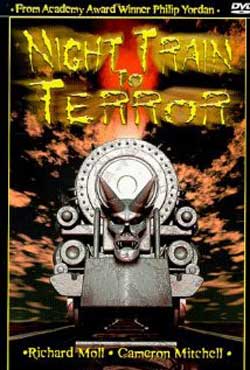 An anthology of short horror films that features stories about an evil insane asylum, 2 lovers involved in a death club, and a demonic guy that just refuses to die.

I watched Night Train to Terror many years ago and didn’t care for it, and when I watched it again recently I think I liked it even less. Normally I love horror anthologies (with Creepshow, After Midnight, and the original Tales from the Crypt movie being among my favorites) but this movie is the definite exception. One of the things I like about anthologies is the fact that if one of the stories sucks there are still others that may appeal to you but this just isn’t the case with Night Train to Terror as all three of the shorts are pretty lousy and the wraparound (which features God and Satan on a train having a chat while a bunch of people sing and break dance all over the place) is just as bad. I had a hard time making it all the way through this movie but I managed to do it which is pretty impressive considering that some of the stories (especially the last one) are almost unwatchable. 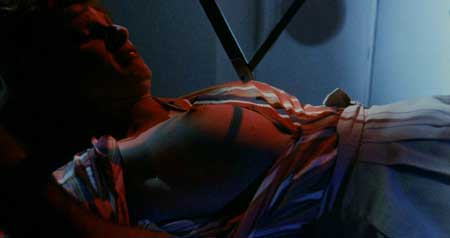 The first story-which is probably the best one-deals with doctors at an insane asylum that kidnap innocent people (mostly women) and then subject them to a number of horrible things before killing them. I’m not entirely sure why they kidnap and kill these people but I think they may be selling their body parts on the black market if I’m not mistaken. I found this segment to be confusing and boring and the only things that really save it from being a total waste are the gore and the appearance of Richard Moll (of Night Court fame) as a demented orderly who enjoys hacking people to pieces. As I said earlier this was probably the strongest of the 3 stories but that isn’t saying a whole lot since it is pretty bad in its own right. If you decide to check out this movie I highly suggest that you stop watching after this segment as things only go from bad to worse. 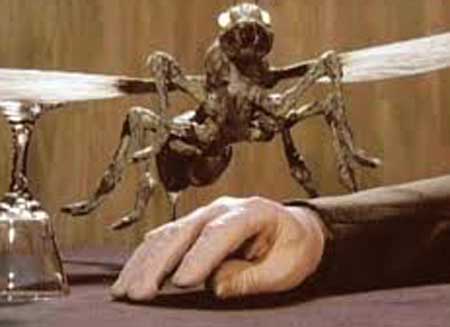 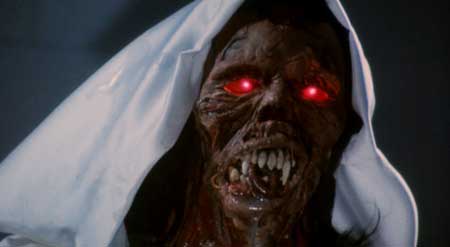 The second segment is about a guy who steals a woman from a rich man who is part of a group called “The Death Club” who is fascinated with what else? Death. The jilted rich dude makes the couple join his club and they are forced to attend meetings that always ends with one of the members dying in some weird and unique way (such as being stung by a giant bug, electrocuted, or having a wrecking ball dropped on their head). On paper it sounds sort of interesting but trust me when I say that it isn’t. Aside from the horrible acting and terrible effects (you can actually see the string on the giant insect puppet thing at one point when it is flying around the room) this segment really has no end and just comes to a screeching halt for some unknown reason with no resolution. We are basically told in the wrap around that the woman ran off with a young man and they lived happily ever after. WTF? Did some of the actors quit before the segment was finished being filmed or what? 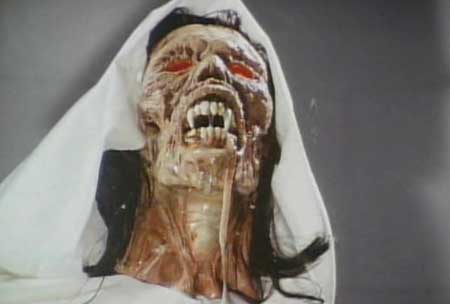 The last story centers on this evil servant of Satan and all the evil things that he goes around doing over the span of several years (we see him as a Nazi at one point at the beginning and then he hasn’t aged and looks just the same as he continues his evil deeds years later). A woman takes it upon herself to kill him once and for all at one point and comes up with a plan to take him out. Is her plan successful? Does she end his reign of terror? I’m not saying just in case you actually want to see this turkey but let’s just say that the ending is pretty corny. This is the longest segment and since there is very little action it seems to go on for ages. Moll makes an appearance in this one too (I guess he had a car payment he needed to make or something) but looks like he would rather be somewhere else every time he is on camera. Definitely the weakest piece (which is saying something since the other two are nothing to write home about either). 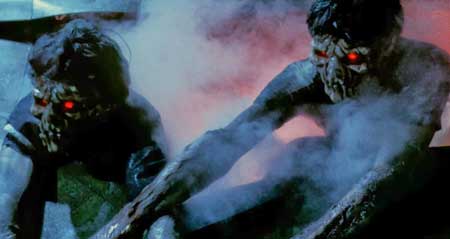 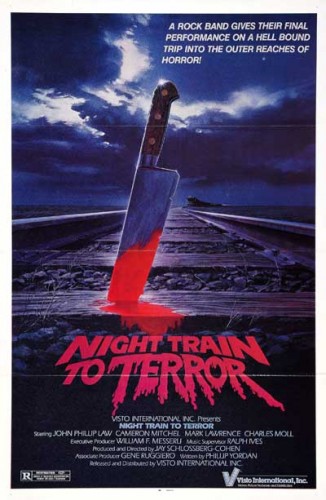 I thought that Night Train to Terror was just plain bad. It is boring, the stories (which are all condensed versions of longer films) failed to hold my attention, and the wraparound is so goofy and silly that it is almost painful (unless you like a bunch of badly dressed people running around singing and dancing all over the place) and the ending is just ridiculous. I have a hard time recommending this one to anyone, but if it sounds like something you might be into (which I seriously doubt) then check it out. Just don’t blame me when you end up hating it. 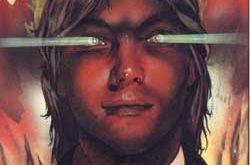