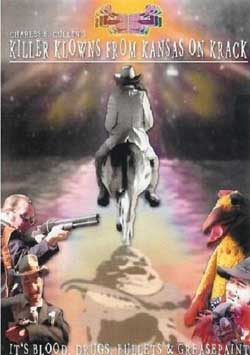 After being fired from the rodeo, three clowns and a giant chicken get involved with mind-altering drugs that send them on a bloody rampage across Kansas. Pursued by a U.S. Marshall from Utah who specializes in clown cases, they become dangerously entangled with a swindling cult leader whose truck (full of scammed cash) they have stolen to pull their trailer. It’s a crazed festival of guns, puppets, blood, rubber noses and dark humor.

I’m going to be totally upfront about this particular review right now – I intend to give this movie some love even if it kills me. Just putting that out there right now.

Six guys. that’s it. Six guys made this film all by themselves on their own dime with one camera. It doesn’t get any more indie than that, people. 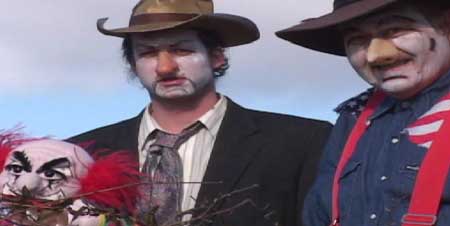 Will Henson, Peter Mercy – the rest of the characters.

There are a few other walk-on actors not credited on IMDB, but on the whole this is the entire cast and crew of the film.

And other than Mister Cullen (who has credits for other indie productions, mostly his own), not a single one of them has any other experience. No other credits. Just this masterpiece of cheese.

So our story begins with a couple of stoner rodeo clowns getting busted by the rodeo owner. Unceremoniously fired, they travel into the unknown looking for a place to belong. They encounter the local crack rock sellers and discover a new purpose to their lives. It is at this time they head out and mug a little girl in the countryside. After beating her up and stealing her doll baby, they stab and shoot her. Good times. On crack. 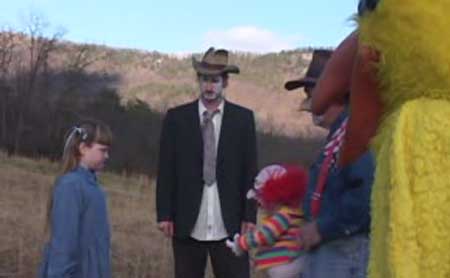 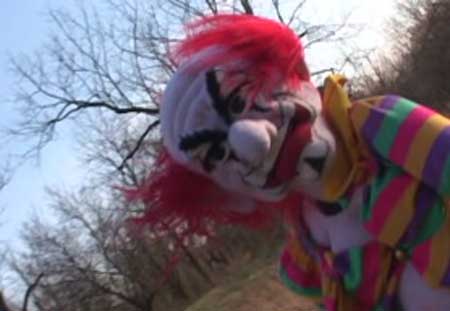 After that, they encounter a nice farm girl and her guinea pig on the railroad tracks. Yea, we’re not gonna discuss that.

Eventually, they find themselves in the company of an apocalyptic cult leader(or more to the point, in posession of his stuff that they stole) and pursued by a US marshal from Utah specializing in clown-related crime…

I know, right? I sound like I’m on crack right now. Seriously, this is the film folks.

We have guys in chicken costumes, we have drug-addled clowns, we have cheesy animation, we have puppet vignettes. You read that correctly. PUPPETS. Puppets on drugs. Puppets selling drugs. puppets slapping other puppets.  And then there’s the prosthetic noses. I can’t even begin to speculate on what that’s all about.

We have so much going on in this thing that It’s really hard to summarize what I’m looking at. It’s surreal and disjointed, but in an acid-driven 1970s sort of way. Half the film are these non-sequitor sequences that make the viewer say “WTF?”.

This is the kind of film I used to show at parties back in the day. Chances are, I’ll show it at parties in the future. It’s terrible, and brilliant, and strange, and so much fun! It’s all over the place, but I can’t stop watching it.

I can note a few complaints. The main theme song is repeated over and over again, and that gets a bit annoying after a while. The sound mix isn’t all that great, but I can live with that as it fits the over all feel of the film.

I did some research on the writer/director.  He appears to be a jack of all trades and master of none. He lists among his skills – chicken farming, puppetry, music, special effects make up, acting, explosives handler, painter, occaisional cross dresser ( not even making that up)and apparently he has a cable access show as well. This guy fascinates me. He should interest you as well. Just look him up. you won’t regret it.

This film is crude, sometimes offensive, low budget, and I don’t suppose it’s for everybody. As for me, I love it for everything it isn’t – pretentious, self serving, or taking itself too seriously. It reminds me of those awful super 8 horror films so many of us made with our friends in the back yard back in the day. They stunk on ice but they were full of heart and we made them for the sheer fun of doing it.

oh and stay throught he credits, BTW. Totally worth it.

On a scale of one to ten, ten being awesome, I give this film 6 crying clowns.