The Twilight Zone: The Complete ‘80s Series Slated for August 26 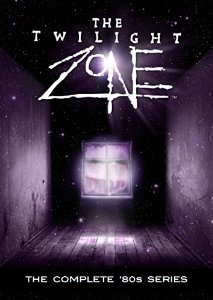 Travel into the fifth dimension once again with THE TWILIGHT ZONE, testing the limits of reality and exploring the mysteries of the universe.  Airing from 1985 to 1989, this critically acclaimed anthology series carried on the legacy of the original Rod Serling program and attracted a brand new audience of fans. The series features major stars – including Bruce Willis, Morgan Freeman, Helen Mirren and Martin Landau to name a few – in compelling tales of intrigue by such noted writers and filmmakers as Ray Bradbury, Stephen King, Arthur C. Clarke, George R.R. Martin, Wes Craven, William Friedkin and so many more!

This collection contains all three seasons from the classic ’80s TV series.

Special features include a photo gallery, an exclusive Wes Craven video interview as well as over a dozen audio commentaries by the creative forces behind the show.