Los Angeles, CA, July 22, 2014 — Filmmaking brothers Michael and Peter Spierig have been tapped to rewrite and direct Hammer Films’ WINCHESTER, a supernatural thriller based on the world famous Winchester Mystery House in San Jose.  The filmmakers are rewriting a script originally penned by Tom Vaughan that tells the story of Sarah Winchester, heir to the Winchester firearms fortune.  Hammer is eyeing an early 2015 start date.

After the sudden deaths of her husband and child, Sarah Winchester came to believe she was cursed by the rifle’s victims and the lethal legacy of the “gun that won the West.”  At the instruction of a spiritualist medium, she moved to San Jose in 1884 and began round-the-clock construction that would last thirty-eight years, and result in a 24,000 sq. foot, 160-room Gothic mansion.

“We can’t wait to see what the Spierig brothers unearth as they delve in to the mysteries of Sarah Winchester and her infamous haunted house,” said Tobin Armbrust of Hammer Films.  “As the first feature film ever shot inside the Winchester Mystery House, we are excited to have these fantastic filmmakers bring their unique vision to the table.”

The Spierig brothers recently wrapped the Ethan Hawke starrer PREDESTINATION from Sony.  Previously, they collaborated with Hawke on their 2009 Lionsgate release “Daybreakers,” which also starred Willem Dafoe.  They came to prominence in 2003 with their indie zombie film “Undead.”

The deal was done on behalf of the Spierigs by Robert Carlson at WME and Lou Pitt at the Pitt Group, and on behalf of Hammer by Alexa Pagonas of Michael Black Management and Leisha Mack at Wendy Heller Law. 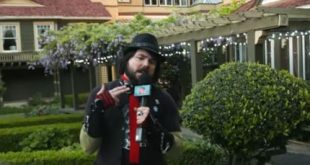 Don’t Get Spooked on this Tour of the Winchester Mystery House!