The Day the World went away – new zombie production – pics! 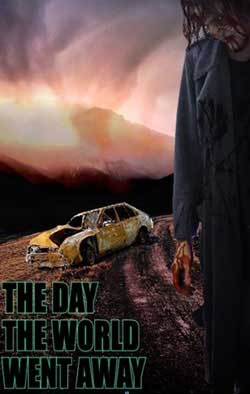 Synopsis:
“A man clings to the one thing in this world that is still pure and true. Surrounded in destruction, deception, and the armies of hell, one man and his infant son run the gauntlet of damnation to find one spot on the Earth that hasn’t been corrupted by the atavistic horror that has consumed humanity”

Background:
The making of this film is a labor of love and all about family involvement. Four members of the Messenger family come at this short film with every talent they have whether it be acting, writing, or special effects they’re giving it everything they have.

One dark, stormy afternoon Ian Messenger took to the internet and saw the leaked trailer for “The Walking Dead”, watching the beauty of this made him realize his next film would be a zombie one.
What makes this zombie film any different than the millions that have come before it? Simple, the answer is: Heart.

When Ian Messenger first told that to people they laughed at him and made jokes about the idea of a zombie film having heart. That was until one day he asked someone who will remain anonymous what they thought about a zombie film with heart after a long response, the final sentence stuck with Ian and will remain with him forever – “How can a film about humanity lack heart?”

Tags The Day the World went away