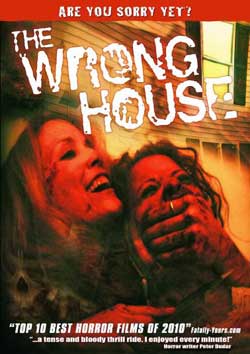 An isolated house in the woods looks like an easy mark to a group of friends camping in the Maine wilderness. The thieves haul away several ounces of pot and hallucinogenic mushrooms in the heist. But when the homeowners track them down, the thieves learn too late that there are some people you just shouldn’t mess with… and that they picked The Wrong House.

It’s always fascinating to watch a micro-budget genre flick put forth an intriguing spin on a known premise, then proceed to piss all over it by failing in every possible realm of execution.  Approaching these D.I.Y. endeavors, one must allow for a few stumbles.  Widen the strike zone, as they say.  Allow them to play with a handicap, if golf is your thing.  Perhaps even [insert soccer metaphor here], for the World Cup fans.

First (and only) time film maker Shawn French earns points in the opening moments of “The Wrong House” by audaciously introducing us to the bad guys.  Sort of.  Steve (portrayed by French) and Susan (Sue Stevens, who co-wrote the script), owners of the secluded title abode, jump right into their dirty business before the credits even roll. We discover a brutalized man tied up in their basement, a child abuser who’d left his young son to suffer for days after breaking his leg.  Seems our horror heavies follow a moral compass to victims, as Susan explains with a quick lesson in karma before Steve teaches him what a broken tibia feels like. 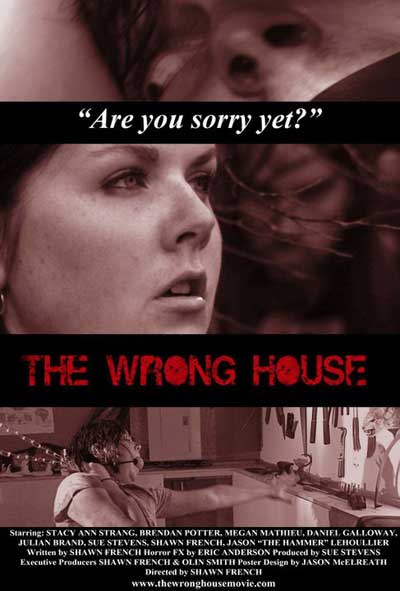 Though neither will ever be in Oscar contention, French and Stevens bring enough depth to the multi-faceted psychos to hold interest.  Unfortunately, they share equal weight of the screen time with that go-to gaggle of hapless victims/heroes, the Obnoxious Twentysomething Douchebags.  “OTD” from here out, unless I actually bother to use names.  Consisting of three males and two females (yes ladies, you’re also capable of douchebaggery), every minute feels like an eternity with these people.  For the sake of propriety I’ll leave the woeful performances alone, as I suspect by the lack of IMDb page activity since 2009 that these folks have attained success along other avenues.  Good for them.

A pointless car scene between Kris and Derek (Stacy Ann Strang, Brendan Potter) provides the first taste of fun to be had in the company of OTD, as they bicker about being lost in the woods before the shot cuts away immediately to them not lost and setting up camp.  The site belongs to Donny (Daniel Galloway), Kris’s ex and an angry bully who continues to hit on her and pick fights with Derek for no reason.  Straight out of the gate, this begs the question of why a slightly intelligent couple would go anywhere near the guy, let alone tent out for a night.  And how is this place even “Donny’s Campsite”?  They’re in the middle of nowhere!  Do they somehow require this squatter’s particular locale to hang out in the vast wilderness of Maine?  There’s another couple in the mix as well, but they serve only to tip the idiocy scale when the need for poor decision-making arises later. 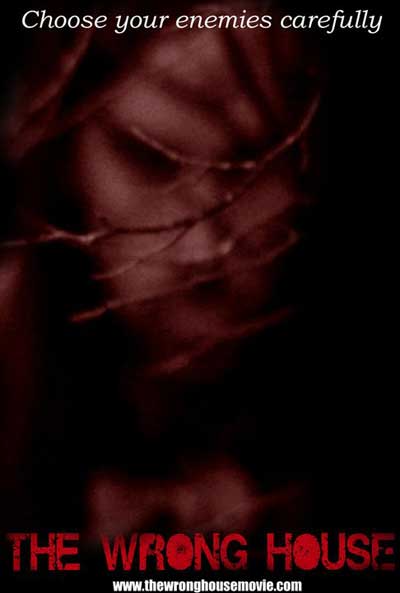 A hike the next morning leads the OTD to Steve and Susan’s currently empty home, and Donny recruits the two dumber ones to assist him in breaking & entering.  Inside, they steal a large amount of marijuana, pills and the kind of mushrooms that only wastoids like me put on pizzas.  Unbeknownst to them, the property is monitored with secret cameras, and they plan to meet back on Friday to partake of their booty.

Things become slightly engrossing again during the week, as the leads are individually approached by either Steve or Susan, offering a passive-aggressive ultimatum to each: Return the ill-gotten goods by 5:00 p.m. Friday, or the next time they meet will end unpleasantly.  Stevens saves what could have been a painfully long stretch while giving Kris a ride home after a breakdown, flashing menace beneath her matronly smile.  This leads to an incoherent and possibly ad-libbed OTD group discussion, as they agree to do nothing and call bluff.

This is where “House” suddenly side-steps logic and shoots logic in the face as it’s passing it by.  I can understand the choice to forget about the visits and hope the threats were empty, especially when said choice is reached by the truly stupid.  Hell, boneheads across the globe die every day by not heeding warning signs.  That’s natural selection.  However, I refuse to believe that anyone, any single person ever, would return to the exact same remote location seconds after the cut-off time rolls by on Friday.  That is begging to be murdered, which due to the actions of these imbeciles, would likely occur even if the antagonists had never committed homicide in their entire lives.  Out of sheer principle, a Buddhist monk would ruthlessly slaughter them and remain at peace about it.

The entire enterprise runs dry of ideas shortly thereafter, resulting in a closing third of the usual chasing, capturing, torturing, escaping, recapturing and dozing off (that last one was me).  Force-feeding one of the girls heavy hallucinogenics and terrorizing her with a “City of Lost Children” style freak-out is original, though funnier than probably intended.  The brunt of the finale is tame brutality with the cast soaked in stage blood to convince us we’ve been watching something much more visceral and gory than we actually have.

The less the awful public domain soundtrack or the government assistance flip phone picture quality is discussed, the better.  In fact, throwing any stones at “The Wrong House” is cruelty on my part, given that it was a onetime dalliance for most of those involved.  In that spirit. . . 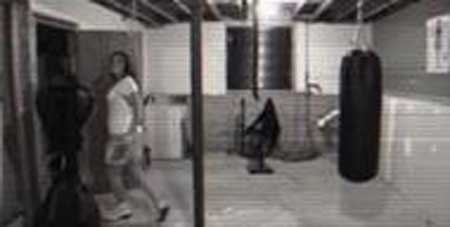 Screw it.  Check this stinker out should it cross your path.  For all you know, your boss or favorite bank teller may have been involved in its fruition (especially if the name is Shawn French).  Tell him or her “great job” from yours truly, and never mention this review.