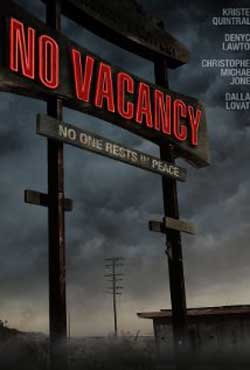 Seven friends on a road trip to Las Vegas break down near a rest-stop motel, where they encounter a seemingly helpful group of people. Convinced to stay overnight, the friends wake up in their rooms to a gruesome and bloody terror.

I have a bone to pick with Rob Zombie.

Over the years, I’ve had to step up and defend the rocker-turned-wannabe auteur from the harsh words of horror traditionalists.  Digging his excessively arty filth, I’m more than happy to herald the man as an innovative film maker to those who believe his body of work is nothing more than mindless mayhem with grade school haunted house lighting.  Hell, I’ve even gone so far as to describe “Halloween II” as “not entirely unwatchable.”  Please forgive me.

That was all before being subjected to the shameless knock-off that is “No Vacancy.”  Writer/director Chris Stokes (“You Got Served”) strives desperately to replicate Zombie’s strange vibe with his latest, creating what amounts to a well-produced empty canvas.  Though “by-the-numbers” may be the incorrect phrase for a film that apes the likes of “Devil’s Rejects,” it feels appropriate here.  Even the title change is indicative of the endeavor’s nature.  The original moniker “The Helpers,” which is just enigmatic enough to capture attention, was ditched in favor of something so generic that it reads like secret code informing possible viewers to move along and continue perusing.

A group of seven freewheeling and blandly attractive young adults (sigh), en route to Las Vegas for a weekend’s debauchery (deeper sigh), experience a blowout in the middle of the Nevada desert (too depressed to sigh) and are immediately taken in by the seemingly friendly locals (loading the gun).  Did I fail to mention the lack of phone reception, or the prerequisite odd-man-out Phil (JoJo Wright), who dreams of Hollywood fame and has brought along his video camera to record the vacation?  Lucky us.

The incorporation of the hand-held photography (Anyone else remember when Walter Hill attempted this gimmick back in 1992 with “Trespass” and failed miserably?) with competent cinematography and set shots jives initially, but becomes an obnoxious distraction by the midway point when it is relied upon heavily to mask budgetary limitations.  Displaying carnage as filmed by an epileptic documentarian in the midst of a grand mal seizure is no longer considered a clever cheat.  Today, it’s just a cheat.

Our protagonists are given a tow by Steve (Braxton Davis of “Paranormal Activity 2” and “Mischief Night”) to a remote rest stop area with a service station, tavern and motel.  Apparently, replacing a couple of tires is one of those complicated procedures that takes at least a day to complete.  They are offered free room and board for the night, including copious amounts of liquor served up by flirty waitress Norah.  Dallas Lovato portrays the female heavy as an almost genetically perfect reproduction of Sheri Moon Zombie’s Baby, complete with cowboy hat and crazy eyes.  Lovato appears to be a capable actress in her first large role, so I’m going to give her the benefit of the doubt and assume the decision for outright mimicry wasn’t entirely hers.

The following morning brings the shocking reveal (which I spoiled in the previous paragraph) that the formerly titular “helpers” are perhaps not so helpful after all.  Apologies to those who didn’t see that one coming.  Camera in tow, Phil meets a shocking end whilst trying to rouse Todd and Claire (Dustin Harnish, Kristen Quintrall) from slumber.  It’s a fun and unexpected kill, establishing what was obvious ten minutes in without unnecessary explanation.  That part comes later.

“No Vacancy” shifts from that jolt into ugly snuff film mode, as Todd and Claire find themselves locked in their room, forced to watch their incapacitated friends on a closed-circuit television.  The next to meet a grisly demise is Anna (Rachel Sterling, “Reno 911!”), whose death will seem mighty familiar to anyone acquainted with the cinematic villainy of Rutger Hauer.  Not only uninspired in basic concept, it’s then regurgitated for the finale!  Note to Stokes: The worst case scenario at the end of the movie should not be an outcome already witnessed nearly an hour prior.  It should be. . . you know.  Worse.

An attempt is made late in the day to stammer out a long-winded and clunky motive for the baddies, a revenge plot that would constitute a surprising twist if it hadn’t been foreshadowed from the onset with all the subtlety of a hidden chew toy on an episode of “Blue’s Clues.”  However, it must be commended that “No Vacancy” adds context to the communal madness, a thematic layer Zombie never bothered to peel away from Captain Spalding and company.  Given the awkward outcome here, perhaps his lack of exposition was a wise choice.

Stokes continues to show promise as a director despite his unfortunate script, staging certain moments so well that they could have been cut from a much better, very different film.  One extended sequence finds Claire playing cat-and-mouse with Norah and henchman Brad (Cameron Diskin) in the bar after the tired trope of a failed escape attempt.  Nearly soundless, it’s a lonely sliver of suspense amidst the dull carnage, soon laid to waste once Claire finds a c.b. radio and proceeds to drop all thoughts of concealment by shrieking into it at the top of her lungs.  A stone deaf maniac could have found her at that point by following the vibrations of her voice along the walls.  Another pity, because the entire cast is a uniformly strong ensemble given nothing to do with their characters outside of shouting and crying.

Boasting a few fleeting glimpses of potential talent in front of and behind the camera, “No Vacancy” succeeds only as a slick rehash.  Not even extreme enough in its violence to recommend to the gore hounds, it’s a feckless journey indeed.  Move along, friends.  Continue perusing. 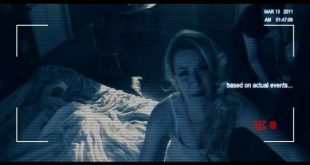