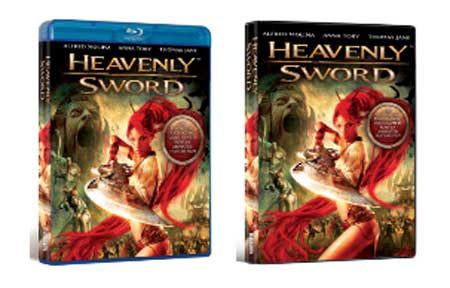 A Deity Is Reborn In The Highly Anticipated Fantasy Film Adaptation

A dramatic tale of revenge, Heavenly Sword centers on Nariko (Torv), a trained warrior with flaring red hair, who gracefully possesses a titular, heavily sought after blade with incredible powers. As the sword’s guardian, she must face a megalomaniacal ruler King Bohan (Molina) and his unyielding army, who are determined to obtain the powerful sword for their own manipulation.

As one of “the most anticipated movies based on video games” (Gamepur), the Blu-ray and DVD are packed with bonus footage including behind-the-scenes interviews with the cast and filmmakers. The film will also be available on the Sony Playstation Network.

Heavenly Sword was brought to Cinedigm by TriCoast Worldwide, who represent the producers, Blockade Entertainment and Film Financial Services.

Nariko’s clan has long protected the “Heavenly Sword,” a god’s blade of immense power that drains its wielder of their life force. A power-hungry ruler known as the evil King Bohan seeks to obtain the sword to gain its devastating power. As the impending apocalypse nears, it remains to be seen how long Nariko can resist the sword’s deadly curse.