New BEASTS OF THE BAYOU – Premieres July 10 on Discovery Channel

For hundreds of years, the marshes of Louisiana have been plagued by mysterious creatures intent on causing mass destruction. Some believe that these creatures are ones of mythical ancestry. Others believe there are more scientific explanations for the increased levels of destruction in the area over the years. Whose theories will be proven true? Featuring some familiar faces from SHARK WEEK 2013‘s successful special VOODOO SHARKS, Discovery Channel ventures deep into the bayou to explore all possible scenarios in its all new program, BEASTS OF THE BAYOU, premiering on July 10 at 10 PM ET/PT. 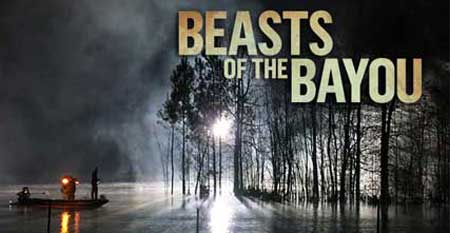 Captain Blimp Cheramie, his first mate, Eric, and his nephew, Nathan, search through the marshes of Louisiana, on the hunt for the legendary creatures that are rumored to haunt the thousands of square miles of swampland around their homes. Stories of the creatures’ origins are those of legend, passed down from generation to generation with little proof of their validity…for now. All the while, teams of scientists are seeking alternative explanations for the sightings and stories that have plagued this region for so many years.

Blimp and his team will use all of their expert hunting and tracking skills to uncover the truth, while the scientists will rely on their theories and a lifetime of research to dispel those very same myths. The two groups have their own methods but, in the end, they each uncover startling evidence that’s sure to shake up the Cajun bayou forever.

In the first episode, the two teams explore the legend of the Altie. Short for Altamaha-ha, this Loch Ness monster-like creature is rumored to stalk the waterways of the southeast. More recently, it is thought to have migrated into the bayous of Louisiana, accused of frightening a vacationing family that was out on jet skis. Blimp and his crew are on the case, determined to prove once and for all the existence (or lack thereof) of the Altie. Meanwhile, scientists from Tulane University believe there is a more logical explanation surrounding these hauntings, a giant Alligator Gar Fish perhaps?  It’s scientific evidence vs. Cajun know-how, as each group searches for answers in the waters of the bayou.

In the second episode, premiering July 17 at 10 PM ET/PT, teams attempt to track down the illusive Parlangua. In the 1960s, rumors of a half-man, half-reptilian gator surfaced in Rapides Parish, Louisiana when a car was pulled from the swamp with the driver half eaten. Since then, the creature has allegedly worked its way south toward the bayous, attacking livestock, trappers and fisherman for decades. Blimp and his crew head out to investigate before the trail goes cold.  At the same time, in Belle Chasse, Herpetologist, Shawn Heflick, believes the uptick in Parlangua sightings is due to misinterpreted reptilian behavior and not the existence of mythological beings.  Each team has a mission: to discover the truth behind the Parlangua. Could it be that a half-man, half-alligator creature is indeed stalking the swamps of Louisiana?

Tune in to find out which teams will shed light on these timeless tales of beasts, creatures, demons and monsters!  It’s book smarts versus swamp smarts on BEASTS OF THE BAYOU.

Discovery Channel is dedicated to creating the highest quality non-fiction content that informs and entertains its consumers about the world in all its wonder, diversity and amazement. The network, which is distributed to 98 million U.S. homes, can be seen in 225 countries and territories, offering a signature mix of compelling, high-end production values and vivid cinematography across genres including, science and technology, exploration, adventure, history and in-depth, behind-the-scenes glimpses at the people, places and organizations that shape and share our world. For more information, please visit www.discovery.com.

Tags BEASTS OF THE BAYOU