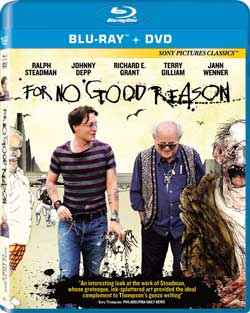 The unique and visually stunning documentary exploring the life of British cartoon-artist Ralph Steadman, FOR NO GOOD REASON, will debut on Blu-ray Combo Pack and Digital HD Sept. 2 from Sony Pictures Home Entertainment. In this Sony Pictures Classics film, Steadman, who is best known for caricatures he created alongside the work of longtime friend, journalist Hunter S. Thompson (Fear and Loathing in Las Vegas), provides valuable insight into his artistic process. The film provides an in-depth look at one of the trailblazers of the Gonzo movement, revealing the methodical way Steadman maintains a delicate balance between chaos and focus.

The FOR NO GOOD REASON Combo Pack comes loaded with special features, including commentary with the director and producer, Charlie Paul and Lucy Paul, as they discuss their 15-year journey to complete the project. The Combo Pack will also include an all-new animated short called Cherrywood Cannon, a dark and twisted fable about a king who creates a monument of power for his Jubilee. The short focuses on themes of control and paranoia in a land fueled by fear. Deleted scenes, extended interviews, and a Toronto International Film Festival Q&A with Ralph Steadman and Charlie Paul will also be included on the release.

Experience 15 years in the life of seminal British artist Ralph Steadman, whose surreal, often confrontational artwork is frequently associated with Gonzo journalist Hunter S. Thompson (Fear and Loathing in Las Vegas). Through Johnny Depps lead in this intimate portrait, we are able to reach the heart of what make this artist tick, his friendships and fallings out, his love for art and his passion for civil liberties. The inventive, energetic, occasionally harrowing, but inspiring film includes contributions from Terry Gilliam, Richard E. Grant, Tim Robbins and others who offer insight into the man behind the legend.

FOR NO GOOD REASON has a run time of approximately 89 minutes and is rated R.