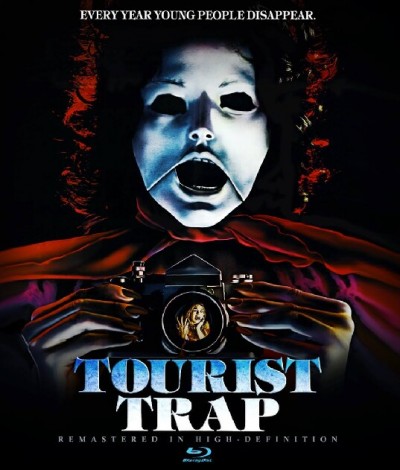 A group of five friends on a weekend outing get more than they bargained for when they stumble upon a shuttered museum of mannequins and its lonely yet amiable former proprietor.

One of the best yet most obscure horror films of the 1970’s has recently made its debut on Blu-ray. Tourist Trap opened in 1979 with little fanfare, and didn’t even play in any of the theaters that I frequented. I didn’t even hear of it until 1984 when it was shown on a local independent television station in New York.

Tourist Trap is arguably the most frightening movie ever made about mannequins, and a classic example that a low budget can be a good thing for a horror film. It’s ultra-creepy without being overly violent and benefits from a general overall mood of restraint until all hell breaks loose. The film possesses an air of originality thanks to Nicholas Von Sternberg’s beautiful visual style and editing by Ted Nicolaou. The film’s theme is familiar by now to die-hard horror film aficionados, however it’s done with such panache that one might not initially realize it. Other watershed horror films that come to mind are Psycho (1960), Sisters (1973), and The Texas Chainsaw Massacre (1974). 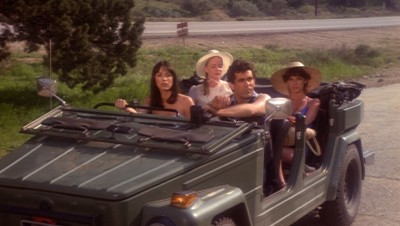 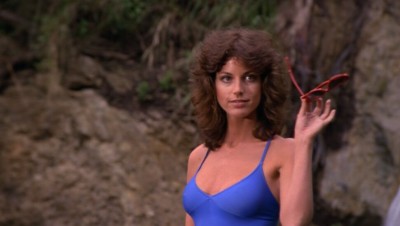 Tourist Trap begins with one of the most bizarre and frightening openings I had ever seen up to that point. Woody (Keith McDermott), a friend of a larger group of young adults, wanders into a gas station after his car sustains a flat tire. After several attempts to locate the proprietor, he enters the backroom only to be locked in and terrorized by a group of mannequins that move and laugh by themselves. This scene is utterly frightening, made all the more terrible by its abrupt ending with a pipe into Woody’s back. His friends Eileen (Robin Sherwood), Becky (Tanya Roberts), Molly (Jocelyn Jones) and Jerry (Jon Van Ness) ride further down the road in Jerry’s jeep and meet Mr. Slausen (Chuck Connors in a wonderful and ultimately surprisingly sympathetic performance as this congenial and charming gentleman who owns a long-defunct roadside souvenir shop/wax museum) after Jerry’s jeep conveniently breaks down.  He is only too happy to help them (Wolf Creek is reminiscent of this). They all ride in his truck to his defunct museum full of wax figures and mechanical dolls which were all made by his brother, Davey. When Mr. Slausen and Jerry go off to work on the car, Eileen takes it upon herself to go snooping in the house behind the museum, only to find herself falling victim to a trap set by Davey who had already trapped Woody. Becky and Jerry find themselves caught in Davey’s clutches, and Mr. Slausen tries his best to protect Molly from his brother. When it’s revealed that Mr. Slausen and Davey are one in the same, it’s still a creepy moment! 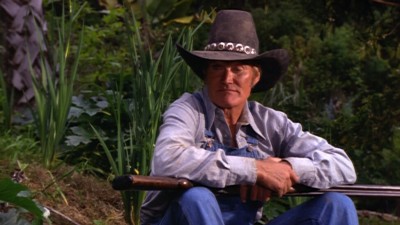 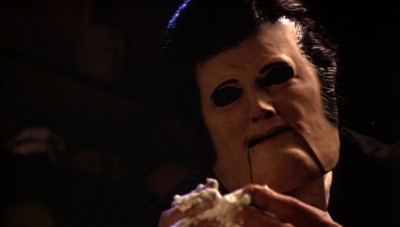 As the story progresses, the natural inclination on the part of the viewer is to refute the plausibility of the off-the-wall set pieces that slowly mount. I find that if you watch it from the standpoint of falling asleep and having a nightmare about mannequins, this film is much more frightening, believable, and ultimately enjoyable.  When I was young, I used to run around in my grandparent’s basement that was populated by some truly scary-looking dolls. One of them had outstretched hands with no hair that walked when you wound it up and it was very frightening; one of the eyes was stuck closed. This film has that kind of effect. 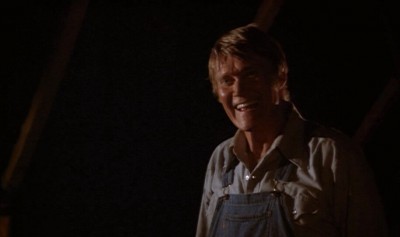 Tourist Trap inexplicably received a PG rating during its 1979 theatrical release which may have killed it at the box office. The Blu-ray transfer of this film is much different from the 1998 DVD in that it is highly desaturated (the colors are no longer bright, but muted instead). This is evident in the opening image of Woody looking for water in his empty canteen. The strength of the colors on the DVD are gone from the Blu-ray. The transfer is also much darker and far from definitive. At times, it rivals that of the dark 16mm airings that made the rounds in the 1980’s and it is difficult to make out what exactly is going on in the frame. Sourced from what appears to be a theatrical print, the increased resolution reveals some obvious strings used to make inanimate objects move giving the audience the impression that telekinesis is at work. Pino Donaggio’s brilliant score, which is not only one of the best elements in the film but also one of the best in the whole genre, is still in mono. The sequence wherein Becky and Molly sneak into the house looking for Eileen contains one of the best musical pieces in the film. This score is a treasure and a new CD release is long overdue.

Director David Schmoeller gives a brand new running commentary throughout the film, and it is not the same commentary from the 1998 DVD. That commentary, though welcome, suffered from a lack of engagement on the director’s part as whole scenes played out without any comments from him at all. Here, Mr. Schmoeller is far livelier and never lets up in his recollections of making the film. As a bonus, there is a 24-minute documentary on him and his career. Strangely, when the disc was released late last year, the limited advertising about it made no mention of any extras leading me to believe that it was a movie-only release.

And now we get to the biggest problem I have with this release. It is cut! Yes, the DVD from 1998 runs 90 minutes, and inexplicably, the Blu-ray runs 85 minutes! By way of a side-by-side comparison, here are the noticeable changes on the Blu-ray that have either been removed completely, or moved to a different section of the film:

00:25:24 – the first change occurs with the removal of Becky and Molly’s dispute about going to look for Eileen

00:47:08 – after Davey lifts up Jerry, Molly is supposed to answer the ringing telephone, then take the flashlight outside. This is on the DVD, but removed from the Blu-ray.

01:02:26 – on the DVD, Molly tries to convince Mr. Slausen to let her go, but this has been removed. Also, the placement of Jerry and Becky’s escape has been changed to a few minutes later.

01:18:11 – Mr. Slausen tells Molly that he can’t let her go and that she has to become a mannequin. This is completely missing from the Blu-ray.

There is some controversy surrounding this new Blu-ray that only came to my attention recently, and you can read all about it here. In regards to the Blu-ray being struck from the original camera negative, the answer is no. Anyone who has been a fan of movies for as long as DVD and Blu-ray have been around can tell this just by looking at the image, you don’t need to be an expert. I have it on good authority from a well-known person in the DVD/Blu-ray releasing world that the either Charles Band or Irwin Yablans (the latter of Compass International Pictures, the company that released the film theatrically in 1979) kept the negative in a storage unit and stopped paying the rental fee, resulting in the raw footage negative reels of Tourist Trap, Halloween, Roller Boogie, and Hell Night being removed from the unit and auctioned off. The original negative of Tourist Trap is now apparently in the possession of someone who was never approached to do a definitive Blu-ray edition, presumably due to costs, and the PAL Blu-ray recently released by 88 Films in the UK is, according to the Web, identical to the Full Moon Blu-ray transfer.

My advice for fellow Tourist Trap aficionados is to spring for the Blu-ray for the extras, and keep the 1998 DVD for the better and brighter transfer.