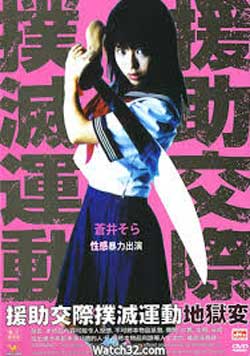 In Tokyo, prostitution in the name of “Enjo Kosai” is in fashion among some high school girls. A mysterious man Kuni lament such girls but cannot deny a strong desire for them. He punish the girls by having sex with them without paying them. He calls this operation “Stop the Bitch Campaign” for public justice…..

There is a small hotel (well, maybe brothel would be more accurate) full of teenage girls, all pretending to be middle school girls, and each with their own unique brand of fetish. A bus delivers blindfolded men to the brothel. After a quick meeting where they are briefed on all the rules (never tell anyone about the place, don’t try to make friends, be gentle, have fun), the men pay huge amounts of money to get their own room with their own girl for the day. There is a girl who dresses up as a nurse and takes care of a man-baby. There is a larger girl who pushes a smaller man against the wall. 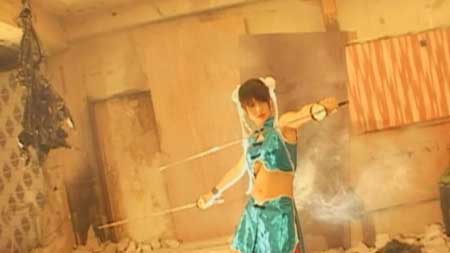 A little back story on this crazy movie. The movie is directed by Kosuke Suzuki, predominantly a director who works on television shows, but one who did have his beginnings in the horror genre (Happy People, Eko Eko Azarak: Awakening, etc…). The pace is frenetic, the action intense and exaggerated, and the storyline equal parts amazing and “did they really just do that?” In fact, the story is based on screenplay written by Keisuke Toyoshima that is based on a Japanese manga (comic) by Tetsuya Koshiba and Hideo Yamamoto. If that second name sounds familiar, it’s probably because he also wrote the comic that became Takashi Miike’s Ichi: The Killer. And now the insane mixture of bizarro and ultraviolence suddenly makes so much more sense.

Back to the film and the conflict of it all. Amidst all of the sexing going on, Aoi keeps a look out for a man who once attacked her. He is a man who once got violent with her, apparently because she was wearing the wrong color panties. So she waits for him to arrive as a customer, sure he’ll be paying her a visit. Only problem is, she can’t exactly remember what he looks like.

Hence, the wrong guy with his parts in a vice. But her memory quickly recovers when a man named Kuni (played by Ken’ichi Endo, a veteran of Takashi Miike films, including Gozu, One Missed Call, Izo, Crows Zero, and his role as the father in the twisted Visitor Q) arrives and pays for a night with all of the girls. And he has brought vegetables. 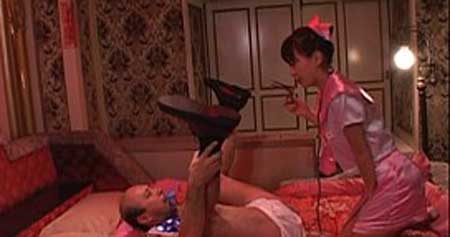 Stop the Bitch Campaign: Hell Version is full of kink and insanity, and the entire movie plays exactly as a comic book would read (no real surprise there). It is very short (only about fifty-seven minutes), so things get crazy quick and don’t let up until the very last second of film. There are vegetables inserted deep into girls’ bodies (not graphically shown, but with added Troma-esque sound effects included), cell phones are shot out of butts, and farts are powerful enough to knock one unconscious. 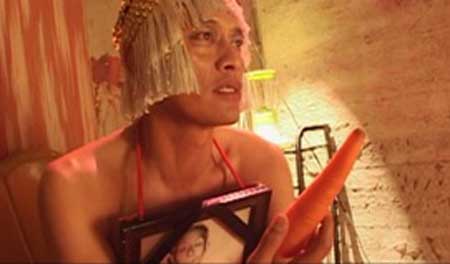 It’s fun and ridiculous and weirdly perverted all at once. So, is Stop the Bitch Campaign: Hell Version worth your time? It is definitely over the top and unbelievable, and manages to have a dirty feel to it that blends in with an otherwise playful look that makes it seem nastier than it really is. If you like the almost surreal world of Ichi: The Killer, but wish it had more of a Benny Hill feel, you will probably like this one (and that, by the way, is pretty much where comparisons of these two movies end; they are otherwise very different films by very different directors). I also know that there are two other related movies both with the same title (simply, Stop the Bitch Campaign), one from before and one from after this one. I don’t know how they are all related, but after seeing this one, I fully intend to find the other two. So, yes, I do believe this film is time well spent. 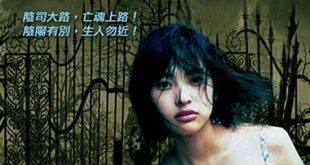 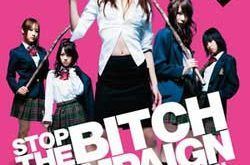