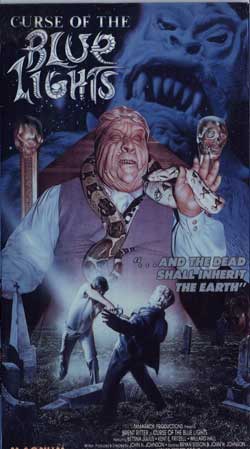 A group of teenagers battle a horde of zombies and evil creatures that live underneath a graveyard. 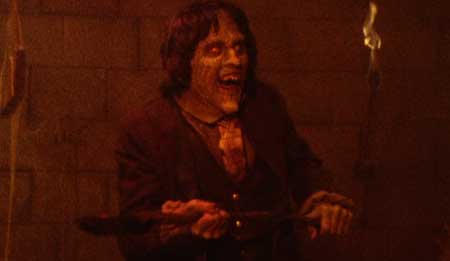 In the town of Dudley, there is a legend that the locals tell. A century prior to when the main story occurs, there was a train. A man who worked on the train hung up the wrong signal lantern. The light ended up being blue and not the proper red light. A train hit the man because the signals were wrong. In the present day, a group of friends see some mysterious blue lights while up on a local Lover’s Lane like place. They decide to investigate the lights and discover ghosts, ghoulish people, zombies, and more hidden in a nearby cemetery. 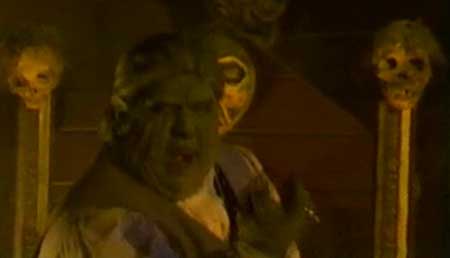 It was tough to stay invested in what was happening during Curse of the Blue Lights. The events unfolding on screen were both confusing and bizarre. This experience should be similar to what the characters are going through. Yet the characters were so undefined, and the acting so absent, it was difficult to relate to them at all. You saw what they were experiencing but you did not care what the outcome would be. This is a fundamental flaw in storytelling that severely weakens any movie. The antagonists were slightly more defined. As the movie unfolds, you discover more about them because their evil plan is what causes the conflict in the first place. If it were not for the ghoulish people doing their dastardly deeds, they would be equally bland as the protagonists. The evil-doers are simply blank slate monster men with a plan. There is no depth to any of the characters. 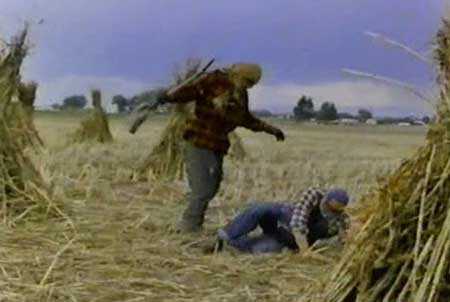 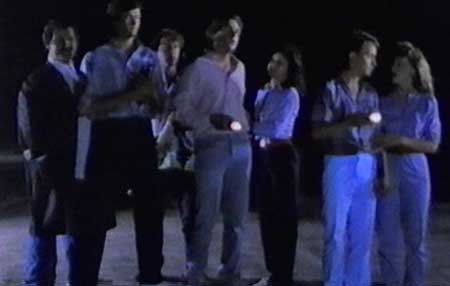 This lack of character depth that I felt through Curse of the Blue Lights could be attributed to a few things. The writing and acting have already been alluded to. Another big issue came in the form of the audio of the movie. Specifically, the audio of the monsters was nearly inaudible. The prosthetic work on the monster characters was good enough to give them a creepy look but it also rendered their speech incomprehensible. At times, I would hear that a character was reciting their lines, but I would only understand a few of the words they said. It was a low-budget film from 1988 so it is easy to understand why no additional dialogue recording was done. There was not the money or resources available to director John Henry Johnson to get this work incorporated into the film. Nevertheless, it was still disappointing that nothing was done to make the dialogue more understandable. It would have helped Curse of the Blue Lights to be more digestible and the characters more defined. 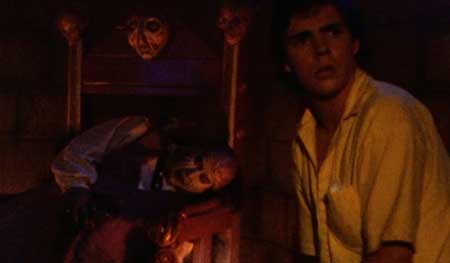 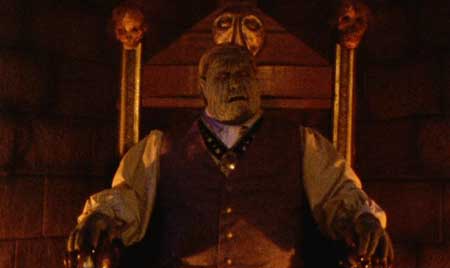 There was one aspect of Curse of the Blue Lights that was well defined. The makeup and effects work was done quite well for a movie that was so poorly put together. As I said before, the work done on the monsters’ faces gave them an eerie look. They were unattractive in all the right ways.

The creature that was revealed during the climax looked fake, yet it did not take away from the moment at all. At one point, a corpse’s face rotted away to uncover maggots. All of these creature designs helped to keep Curse of the Blue Lights afloat. However, the most impressive of the effects was a moment in which the characters traveled through a mirror. In 1988 it would have been near impossible to digitally produce the effect. This is especially true with low-budget productions. The people behind the effects in Curse of the Blue Lights admirably produced the effect using practical means. They showed the full mirror then cut to a close up shot of the actors dipping their faces in mirror-like water. It looked good and was an easy illusion to craft. John Henry Johnson deserves credit for how he got around some of the more challenging details of his film. 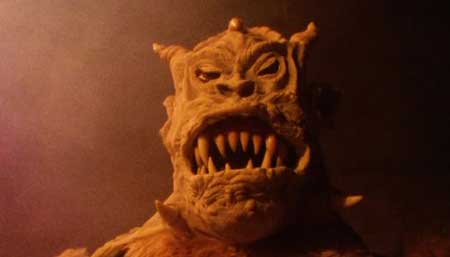 Do not think that the effects forgive everything else that was problematic in Curse of the Blue Lights. They do not. There were still major issues that caused the movie to be borderline unwatchable. Credit where credit is due, and I did give that credit, but it does not take back the hour and a half that this movie bored me for. I will always be haunted by that lost hour and a half. I can never get it back.