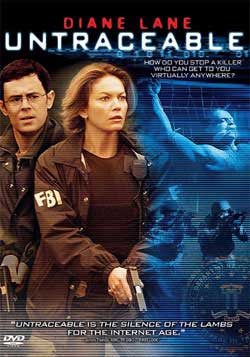 A secret service agent, Jennifer Marsh, gets caught in a very personal and deadly cat-and-mouse game with a serial killer who knows that people (being what they are – both curious and drawn to the dark side of things) will log onto an “untraceable” website where he conducts violent and painful murders LIVE on the net. The more people who log on and enter the website, the quicker and more violently the victim dies.

Untraceable is a great film. It also nailed several modern ideas and perspectives to a good FBI take on the subject. It’s misleading cover with Diane Lane and an FBI team is not incorrect, it’s just not marketed to a horror audience. This film derives itself from the mold of SAW, Se7en and Bone Collector. All great films in there own rights……much of us have come to really enjoy the inventive torture-the-victim type films. “Untraceable” is smart in that it takes something common to us at present and uses that as its premise.

Diane Lane plays the role of FBI agent Jennifer Marsh. A recent widow and mother of 1, she spends most of her nights tracking, attacking and whistle blowing on the cyber criminals and dregs of the online world. Her partner Griffin Dowd (Colin Hanks) and her have got the system down to a science. They track the IPs, locate the cyber criminals and send out the FBI squads to bust down there doors. Even for an acting gig, the terminology and methods are pretty state of the art. Hackers will enjoy the lingo passed back and forth which is also enough for the viewers to make their performances believable.

Its business as usual until one night they come across a site called “Kill for me” that features a live feed. This feed which begins with the online real time torture of a cat has raised a few eye brows. One …the programmer is way ahead of the game using a constant IP switching method that keeps his IP from be traced. Two, the audience and hit count is going up rapidly which is furthered when he begins to include live victims on his site. Each victim is cleverly showcased in a torture scenario that happens over time based on the number of viewers that log into the feed. The more that view…the faster the kill.

FBI agents are dumbfounded when all there usual methods are going nowhere. It begins to evolve into a personal effort that is both local to the FBI and starts to add up to clues that make the kills not so random as they thought. When the killer starts to involve the investigating team per way of hacking into there personal info its an all out war. Marsh strikes up a friendship with Detective Eric Box (Billy Burke) who is also on the case. They hit it off right away and work hand in hand to track down the killer.

What is interesting is that the film uses its personal vendetta against the throes of society which glorifies exceptional footage posted in web sites. The footage being the best of the worst……the online death acts that were happened to be caught on camera. What makes this an exciting above the norm FBI film is that the kills are pretty brutally carried out per torture devices.

As films of like premise, this one also happens incrementally with each torture out-doing the previous one. Scenes include a man being submerged into a tank that lets out portions of sulfuric acid along with him as the viewer hit count increases. By now though the hit count is climbing at alarming rates that in fact contribute to the death of the victim that much faster.

The heart of the film sends a message about us as a cyber society that is only too real and ever present. We are consumers of sensationalism. Nothing is ever too dark or too taboo to raise armchair viewers from there online interest fascination.

Directed by Gregory Hoblit, I highly enjoyed the film and its logic. Untraceable is one of the better horror thriller films to come out of 2008, even though that horror might be genre mixed as an action crime film. Diane Lane plays her role like the excellent actress she is combined with an intelligent script that makes this one a keeper and a must own movie.