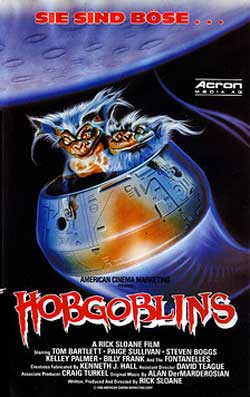 A young security guard must track down diminutive aliens who kill people even as they make their fantasies come true.

Being a child of the 90s, I was raised on the movies of the 80s and 90s. I saw them through television or through home video on VHS or DVD. One movie that was shown to me during my formative years was Gremlins. It told the tale of these evil, little creatures terrorizing a town at Christmas time. The mixture of childhood fun and horror helped to guide me into becoming the person I am. With Gremlins came a myriad of copycat movies that wanted to capitalize on the little creatures terrorizing people craze. One such film was the 1988 movie Hobgoblins.

When Rick Sloane’s third movie began, I did not have much of an idea of what was happening. A security guard named McCreedy (Jeffrey Culver) was showing around a new guard at an abandoned film studio. When McCreedy was called to the boss’s office, the new guard ventured into an old film vault by himself and started air banding on a stage. McCreedy went looking for him and found him dead near the vault entrance. He closed the vault door and ran away. It was not until McCreedy had another new guard named Kevin (Tom Bartlett) to train that he explained what was occurring in the vault. Years earlier, some alien creatures had descended upon Earth. They had the ability to tap into people’s brains and make fantasies become a deadly reality. McCreedy locked them in the film vault to prevent any disasters. Kevin accidentally released the aliens and that was where the whole story began. 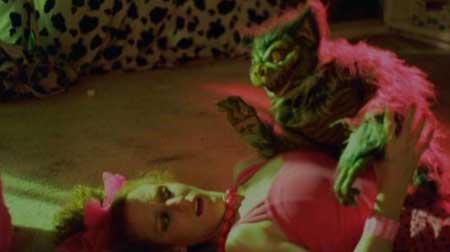 The main story is not about McCreedy and the film studio. Instead, once the monsters are released, we turn to Kevin and his group of friends for the remainder of the film. That works out well since the movie is a horror comedy and the friends are a great source of the comedy within Hobgoblins. As they each suffer from the mind controlling abilities of the creatures, their fantasies come to life in hilarious ways. Much of this comes in the form of visual gags. Jokes such as a van rocking violently in the background while two characters have a conversation in the foreground bring a light feeling to not-so-light material. However, it is the characters themselves that make the movie as entertaining as it is. They fit the horror movie stereotypes to perfection. There is the hero, the outcast, the uptight girl, the easy girl, and the muscle. This character blueprint only strengthens the film as their own fantasies play out on screen and the others react. The culmination is a climactic showdown in a biker bar where multiple characters’ fantasies intermingle to create a catastrophic disaster. People die, people fly, and I cried many tears of joy. It was beautiful.

One thing that was not as beautiful was the design of the titular Hobgoblins. The creatures looked like a creepy toy that you might find a seven year old boy playing with in his bedroom. They looked like teddy bears but they were a little bit uglier than that. Instances where Kevin and his friends had to fight off the hobgoblins in a physical way looked all the more ridiculous due to the designs. When the hobgoblins were behind furniture, it was obvious that they were puppets and people’s hands were inside of them. These complaints are merely a minor fault on the film, however, since the mediocrity of the puppet design only makes the movie funnier. 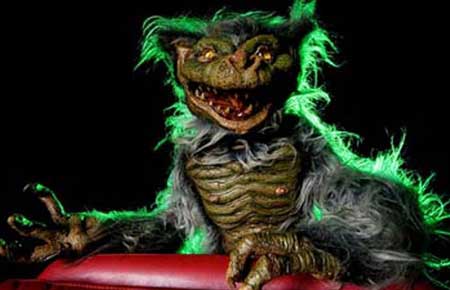 I guess that what I am trying to say through all of this writing is that Rick Sloane knew what he was doing when he set out to write and direct Hobgoblins. It was never going to become anything more than low budget fun, so he embraced that side of the film. He wrote the characters to fit the exaggerated stereotypes, made the monsters look cheap and fake, and heightened the humorous aspects. It made the movie feel fully realized, albeit low quality. 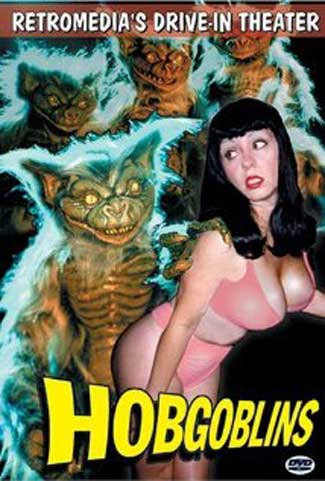 Hobgoblins is a movie that I had immense pleasure in watching. If you can stomach unknown actors who are not that good, bad effects, and dumb comedy that is so stupid that it makes you laugh, it is a movie that you will likely enjoy as well. It clearly takes its inspiration from the movies that preceded it, but it does enough with the material to set it apart from the pack. It is definitely worth seeking out for those who revel in this kind of thing.