Home | Trailer, Poster Art For AS ABOVE, SO BELOW

Trailer, Poster Art For AS ABOVE, SO BELOW

A press release showed up today and it brought along with it a wealth of information and goodies about the new film AS ABOVE, SO BELOW. I’m liking what I’m seeing!

Beneath the streets of Paris rests a deadly secret. Learn the truth.

On behalf of Legendary Pictures and Universal Pictures, we invite you to journey into the madness of the upcoming psychological thriller AS ABOVE, SO BELOW.

Miles of twisting catacombs lie beneath the streets of Paris, the eternal home to countless souls. When a team of explorers ventures into the uncharted maze of bones, they uncover the dark secret that lies within this city of the dead. A journey into madness and terror, As Above, So Below reaches deep into the human psyche to reveal the personal demons that come back to haunt us all. 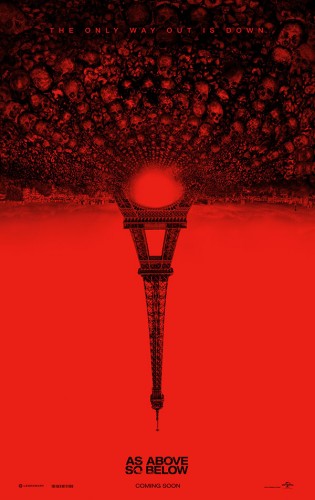 AS ABOVE, SO BELOW hits theaters on Aug. 15th.