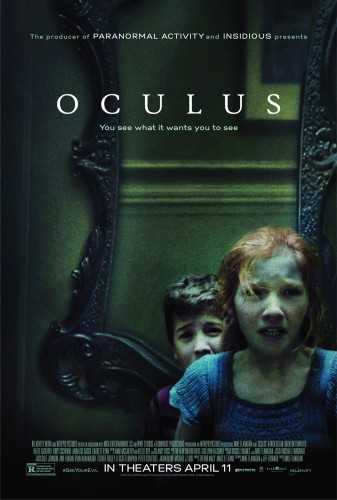 Siblings Tim and Kaylie Russells are reunited after being separated for 10 years. They revisit and investigate the horrifying night they last saw each other: the night their parents died. Kaylie begs Tim to fulfill a promise they made to each other as their family was ripped apart. Together they return to their family home to face their fears, to uncover the truth about what happened and to destroy the supernatural forces that live inside an antique mirror.

Oculus is one of this year’s most original, intelligent and creepy horror films. Unfortunately it is also too slow, rarely ever scary with a second act that meanders around inside its own plot. The film is full of wonderful, deliciously set up but unsatisfiability decides to pull its punches in favor of a shock ending that is telegraphed from the onset. Oculus is far from a failure, however, as director Mike Flanagan (Absentia) displays a considerable and remarkable talent for horror, a style that, while very much in the James Wan wheelhouse of modern horror, is still very much his own. Oculus makes for a terrific date movie or introduction to a young film fan into the realm of horror. For seasoned veterans of the genre, the tricks and shocks are obvious and predictable. The acting provided by its entire cast, including Karen Gillan, Brenton Thwaites, Katee Sachkoff and Rory Cochrane, are marvelous providing the film with its troubled soul and whispered breath. Oculus is a film that will stand out in 2014 with its unique story, tempered approach and top-notch cinematography; although, how successful it is at scaring its audience depends on the viewer’s own familiarity with the horror genre. 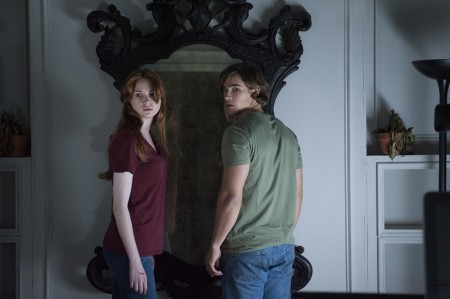 The script focuses on a pair of young siblings, Kaylie and Tim Russell, who reunite after ten years apart, not spending time together since they were pre-teens. The youngest of the two, Tim (Brenton Thwaites) is finally released from a mental hospital as he reaches the age of 21, having been sentenced to their care after being convicted of killing his father. No longer believing the mad stories surrounding that horrific night, Tim is shocked to discover that his sister, Kaylie (Karen Gillan), remains obsessed with proving what they saw the night their parents died. Kaylie has tracked down and obtained an antique mirror the family owned at the time, convinced that a supernatural force reside within its reflection possessing and controlling their parents and their thoughts. Kaylie tricks her brother back to their old home where she has set up a crude but effective experiment with the mirror hanging on the wall to exorcise the spirit from the mirror, from their lives, once and for all.

With this back story, director Mike Flanagan sets up the premise of Oculus brilliantly leading to the film’s best scene where Kaylie begins to explain the history of the mirror as she records the night’s events with a series of digital recorders and cameras. The film is simultaneously told in the present day married with the flash backs sequences to that terrifying night young Tim was forced to shoot and kill his own father; together they reveal the entire story behind the haunted mirror. Flanagan excels in handling of character and mood, creating atmosphere and tone. He establishes Tim and Kaylie quickly, effectively, allowing the audience to understand their motivations, obsessions and conflicts thoroughly investing the audience completely in siblings story and investigation. He establishes that the mirror itself has a horrid history of murderous events, establishing both evidence and doubt, as the two debate the meaning behind the strange history. Sadly, once the reveal happens, how the mirror is affecting its prey, he leaves the mirror literally and figuratively hanging on the wall delegating it to being little more than a prop. From then on the characters never investigate the mirror itself, its origins, its construction, its makeup or the spirits it hides. Its a bit frustrating and distracting.

Oculus is a film full of set up with little payoff. Many will relish the act of “getting there.” The path to the film’s conclusion contains many memorable sequences, some that will haunt and terrify viewers for some time. Once it is established how the mirror toys with its victims, what is real or imagined becomes blurred creating a constant unsettling tone. While the film never quite succeeds in its “what’s around every corner” terror, it does shock a number of times with its bait and switch, sanity-vs-insanity, reality manipulations. In one of the film’s highlights, a shot heavily promoted in the trailers, Kaylie believes she is biting into a light bulb, pulling its bloodied shards from her mouth. It is a sight that will have many squirming in their seats. In the film’s flashbacks the younger versions of Tim and Kaylie must escape their mother who has been possessed by the mirror’s influences in a series of tense sequences. An unfortunate side effect of having a combination of disperse and multiple characters effected by the mirror and the constant is-it-real-or-is-it-imagined toying around with the visuals is that the mirror itself gets lost in the shuffle. There are too many times that the mirror itself becomes obsolete or nearly forgotten.

The strength behind Oculus is the acting. Everyone in the film is spectacular. Karen Guillan and Brenton Thwaites portray the adult versions of Kaylie and Tim Russell giving their characters depth and conflict. Gillan’s Kaylie is obsessed, precise and calculated, determined to prove her brother’s innocence and destroy the supernatural force she believes destroyed their lives. Thwaites’ Tim is troubled, convinced it was all in his mind, manufactured by his imagination to keep him sane. He is uneasy with being back in the home and anywhere near the mirror. Both actors give their roles the right balance of confidence and doubt that allows the mechanics of the film to envelope them completely and the audience to full embrace them. Annalise Basso and Garrett Ryan play the child versions of the siblings with such conviction and intensity they steal the film from everyone else, especially Basso. Their plight as they face their fears, face their possessed parents, face the unraveling of the fabric of reality around them and face the threat of death itself is traumatic and effective. Katie Sackhoff and Rory Cochrane are the parents, Marie and Alan, both giving their roles a mix of sympathy and menace. 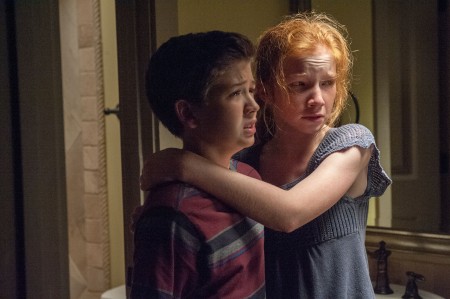 Oculus is horror film that sits comfortably along side a number of recent, modern ghost stories such as Insidious, The Conjuring and Mama. This film is admirable in its approach and handling of the material, it is a serious, original horror film that explores emotions, reality and conflict. It never settles on formula or genre contrivances. Unfortunately, for many horror fans, it also never achieves the height of terror it reaches for. Thankfully, however, for many, it will be a terrific introduction to the horror genre providing tense thrills and gory shocks with an ending that is brave and bold. The film is flawed however. It is oddly paced allowing the film to slow to a crawl far too often and it loses track of its core threat, the mirror itself, as it follows around various, sometimes too random, affects of its influence. The film never reflects its own intent with focus or purpose, the reality of Oculus‘ story is as difficult to determine as the reality the characters find themselves within the script. Oculus leaves its audience wanting more just not in the best way.