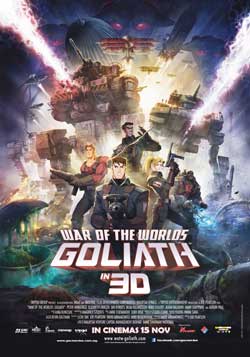 An animated film that takes place 15 years after the events of H.G. Well’s classic tale of Martians invading Earth.  The Martians return but this time around mankind is ready thanks to a special military unit known as ARES that uses advanced technology and weaponry that rivals that of the alien invaders. The war is on, but who is going to be on the winning side?

When I was younger there was nothing that I loved more than coming home from school and parking my overweight butt (I was a chunky kid) in front of the TV to watch cartoons like GI Joe, Transformers. Thundercats, and He-Man and the Masters of the Universe for hours while I chowed down on a bag of chips or some other unhealthy snack (which was probably the reason that I did have a weight problem now that I think about it). War of the Worlds: Goliath reminded me a lot of many of these cartoons that I cherished and I thought that it was nothing short of awesome.

It was one of the best animated films I have seen in a while and enjoyed every minute of it. Combining elements of Independence Day, Starship Troopers, and even Batman (the opening scene introduces us to one of the main characters who witnesses his parents being killed by the Martians when he is a little boy, an event that shapes him into the young man he becomes years later) this film is action-packed and just a lot of fun in general. 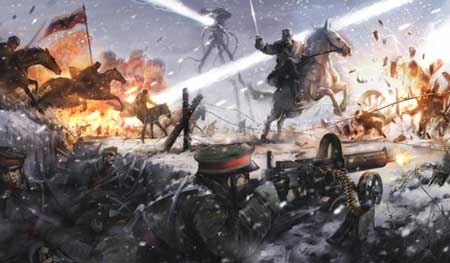 One of the things that I liked most the movie was the fact that it was violent as hell. There are many deaths in this film and many of them are pretty brutal. Major cities are attacked and destroyed by the Martians and as a result many, many people die. When the soldiers of ARES face off against the Martians many of them are killed in battle, and as you are watching it you don’t have a clue as to who is going to live and who is going to die. Characters are blown up, crushed to death by Martian tentacles, and vaporized by death rays (which is cool and pretty damn graphic). A lot of Martians are taken out as well, and my favorite example of this involves a crazed soldier who has lost his wife to an alien attack (he wears one of her cut off fingers on his necklace as a tribute) who continues shooting the hell out of one of them with a machine gun in retribution even though it is obvious that it is dead. If you are looking for an animated film that has people getting killed off left and right in a number of violent ways then War of the Worlds: Goliath is for you! 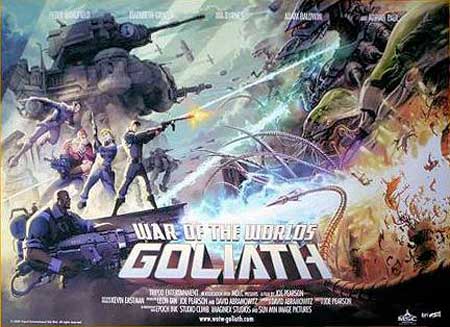 I also really liked the characters as well. Eric-who is the main character of the film-is a total badass and was without a doubt my favorite. He doesn’t mess around when it comes to kicking Martian ass and I enjoyed watching him go to town on them with a variety of cool weapons at his disposal.

He is a brave, likable character and I couldn’t help but root for him as he dove into battle over and over again, taking out as many Martians as he could each time. His ARES teammates are equally cool (though I didn’t really care for O’Brian and the silly IRA subplot that he was involved in that pretty much went nowhere), and I liked that actual historical figures such as Teddy Roosevelt and Nikola Tesla show up from time-to-time (Roosevelt –who is a big muscular tough guy in the movie-actually engages in battle against the invaders at one point and kicks the living shit out of some of them with this huge ass gun). I dug most of the characters that appeared in the movie and hated the fact that some of them die before everything is said and done. 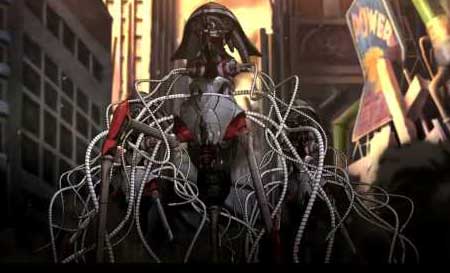 I thought that War of the Worlds: Goliath was a great movie and an interesting and different take on the original story. Some people may not like it’s overall Independence Day-like message (which is basically that all of mankind should put aside its petty differences and join forces together when we are all threatened by an outside force) as it is a little bit cheesy and forced, but I was able to overlook it and enjoy the movie for what it was. It leaves things wide open for a sequel at the end and I for one hope that it happens as I would love to see more of the story unfold. Check it out if you are a fan of War of the Worlds or just like violent animated films in general as it is a fun and entertaining little movie. 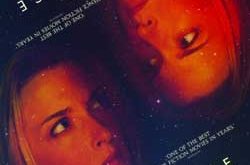