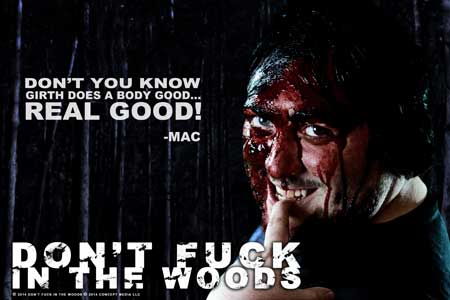 New creature feature “Don’t F**k In The Woods”, attempts horror funding campaign. Though good luck getting anyone to carry the film with that title. Any horror film title that has to be constantly edited is just asking for trouble.

For the last year and a half I have been working on DFITW, and this film won’t be a cheesy film by any means. But at the same time it will have mass amounts of gore, premarital sex, nudity, comedic plot points, impaling, camping, decapitations, and a bloody good time! And did I mention that this is a CREATURE FEATURE?!?!?

The initial goal to completely make this film is $7,327. And every penny of the will be going to the following.

-Making the Creature Suit (made by FX genius Dustin Mills)

*But even if we do not raise the entire goal, this film I will still be made*