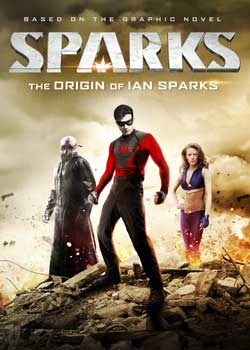 A masked vigilante who suddenly discovers the dark side to heroism. Going after the nation’s most notorious super criminal leaves Sparks’ life and reputation in ruins.

In this day and age the idea of producing a superhero film for anything less than $150-200 million dollars is laughable. With blockbusters like “The Avengers“, “Man Of Steel” & “Iron Man 3” sporting mega budgets (& making mega profits), it’s hard to imagine anyone trying to mount a superhero film for anything less. But the producers of “Sparks” have not only pulled it off but they made it harder for themselves by setting their film in the 1940’s which only made their job a lot harder to pull off. And while they’re not entirely successful they’ve certainly made a much better film than anyone had any right to expect. 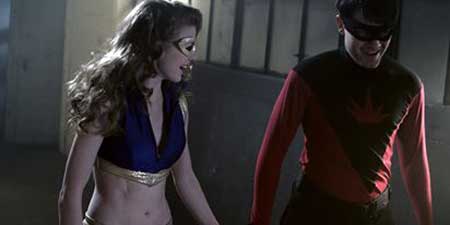 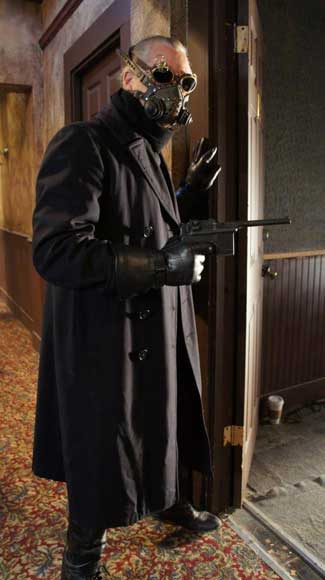 Based on a graphic novel written by its co-director (with Todd Burrows), Christopher Folino (who also wrote the script), Sparks tells the story of young Ian Sparks (Chase Williamson) who, early in the film, loses both of his parents in a horrific auto accident. Surviving the ordeal, he’s taken in & raised by his grandmother who understands when young Ian decides to become a costumed crime fighter named Sparks. And while he’s relatively successful fighting crime in his hometown he runs into trouble when he decides to move to the big city to do the same. The criminals are a lot bigger & badder in the city so Sparks enlists the help of female crime fighter, Lady Heavenly (Ashley Bell) and together the duo not only clean up the streets but fall in love. But in their attempt to take down super villain Matanza (Willam Katt), Sparks not only loses the battle and suffers a devastating fall from grace, he loses Heavenly’s love to another costumed hero, Sledge (Jake Busey). 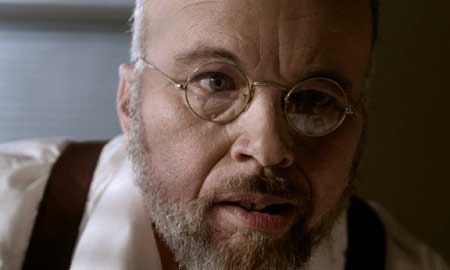 The film then shifts gears to illustrate how far Sparks has fallen which is reminiscent of similar storylines in films like “The Amazing Spider Man” (2012) & “Iron Man 3” (2013). Eventually he ends up as a pimp of sorts to another fallen hero who has the ability to change her appearance to anyone she touches, Dawn (Marina Squerciati). In the midst of all of this a mysterious man named Archer (Clancy Brown) comes into Ian’s life and convinces him to get back in shape in order to take down Matanza and other criminals. Archer explains to him that he saved Ian from the horrendous accident that killed his parents and doesn’t want to see such potential wasted. But does Archer have an ulterior motive for returning into Ian’s life? 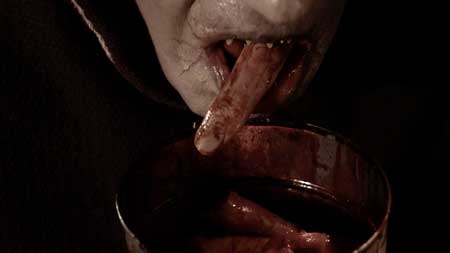 It gets a whole lot deeper than that and that’s one of the problems I had with the film – the script is way too convoluted at times. “Sparks” has a listed running time of 98 minutes but it feels like it’s a lot longer than that and it commits the cardinal sin of having more than a few endings which really drags it down. It adheres to the graphic novel way too stringently forgetting that the two mediums don’t translate perfectly. While I’m sure that Folino did all he could to mold his printed work into a film I think he’s too close to his source material and ultimately tried to keep as much of it in the film as he possibly could. Ultimately this makes the film a bit of a slog at times although he does manage to tie up all loose ends. I think “Sparks” might’ve worked a lot better as two films or a mini series perhaps. But none of this is to say that this wasn’t an entertaining movie, just one that needs some tightening up. 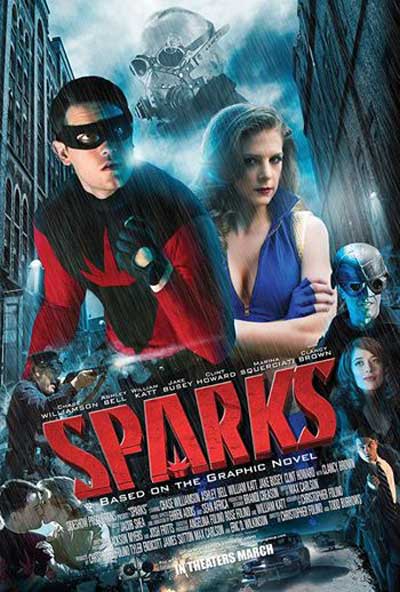 Another issue is the caliber of the special effects on display. The budget precluded having a big special effects team on hand so the entire CGI dept. consisted of 2 gentlemen who labored for months to create over 500 digitally enhanced shots for the film. And sadly a lot of them are really very noticeable with seams showing all over the place. The green screen shots are fairly obvious as well and do very little to convince otherwise. But the ones that do work, work extremely well and while the bad shots far outweigh the good ones it’s obvious that everyone’s heart was in the right place and all involved did the best they could given the circumstances. 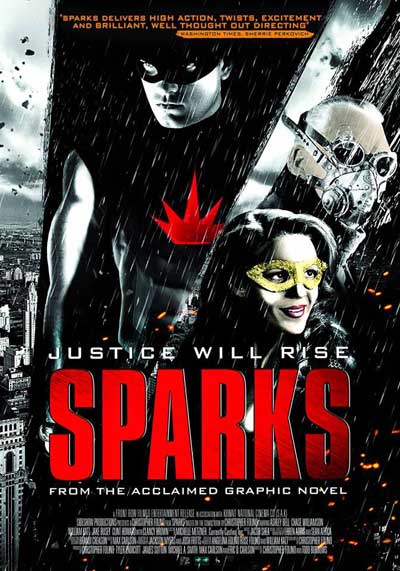 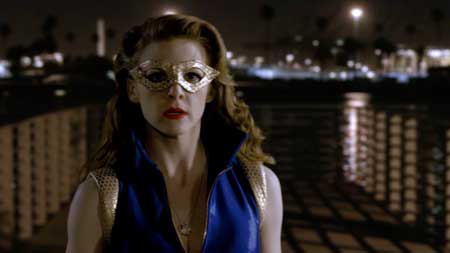 What helps to make the film more than the sum of its parts is its outstanding cast. Ashley Bell is near luminous as Lady Heavenly and so earnest & believable that when it was all over I really wanted to see her character in a film of her own. She’s so good that there are a few scenes during which she seems to summon up her inner “Siren of the 40’s” and she resembled Rita Hayworth circa “Gilda” (1946). Clancy Brown is one of the best character actors alive today and any film he’s in is immediately lifted with his presence, “Sparks” is no exception to that rule. William Katt is near unrecognizable for a time and fills the villain role in a most unexpectedly satisfying manner, he oughtta think about playing bad guys more often. Jake Busey doesn’t have too much to do but his role is pivotal & he makes the most of his onscreen time. Clint Howard makes an appearance as a newspaper editor who Sparks is telling his story to and he plays the role as a gruff, no nonsense tough guy which is the polar opposite of roles I’m used to seeing him in. Interestingly the weakest link in the chain is the star of the film, Chase Williamson, who seems a tad too physically slight to essay the role of a super hero. His line readings are adequate but I wasn’t feeling a lot of passion from him and during the more dramatic scenes he sounds kind of milquetoast. But he does a good enough job and is surrounded by a cast that lifts him up on their shoulders and carries him through his rough spots. 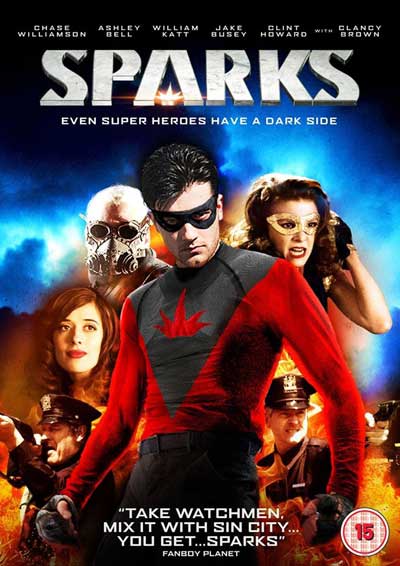 So what we have here is a film that wants to feel a lot bigger than it is and it shows, but at the same time it manages to remain very entertaining & engaging. Some really good performances help smooth out the plot intricacies that slow it down and like I said before – it has its heart in the right place. “Sparks” is a fine example of low budget film making at its highest caliber and despite the problems I had with it, what Christopher Folino & company have pulled off here is near miraculous!

“Sparks: The Origin Of Ian Sparks” (From Image Entertainment, an RLJ Entertainment Brand) will be available on DVD & Digital Download on March 18th, 2014.