You’ve Seen The Poster Now Watch The Trailer – THE SACRAMENT

The good stuff for Ti West’s THE SACRAMENT just keeps on coming! Had the poster roll out the other day and now a full fledged red band trailer. Enough babbling, check out the goods:

From acclaimed writer/director Ti West (THE INNKEEPERS, THE HOUSE OF THE DEVIL) and master of horror Eli Roth (THE LAST EXORCISM, HOSTEL, CABIN FEVER), THE SACRAMENT follows two Vice Media correspondents as they set out to document their friend’s journey to find his missing sister. They travel outside of the United States to an undisclosed location where they are welcomed into the world of “Eden Parish,” a self-sustained rural utopia, comprised of nearly two hundred members. At the center of this small, religious, socialist community is a mysterious leader known only as “Father.” As their friend reunites with his sister, it becomes apparent to the newcomers that this paradise may not be as it seems. What started as just another documentary shoot soon becomes a race to escape with their lives.

Here’s the original one sheet just because I like it… 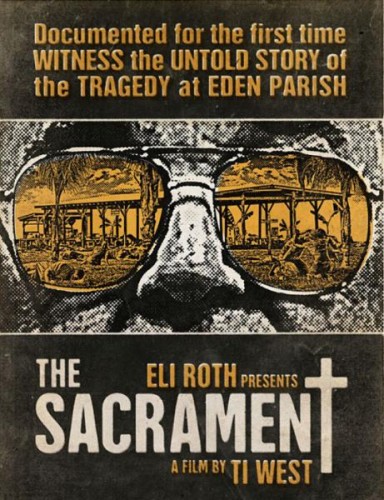