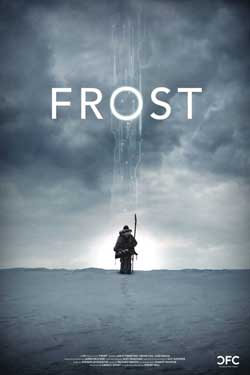 A young couple, physiologist Agla and filmmaker Gunnar wake up at a glacier camp to find the camp mysteriously abandoned and their co-workers gone. When searching for the lost team they realize they’re up against an unknown deadly force.

Any horror set in arctic climes automatically has an edge with those who despise the cold.  A proud subscriber to this lifestyle, my idea of winter sport is watching the mailman fall down my unsalted front steps.  Place me amongst Kurt Russell and company in “The Thing,” and I would’ve been a snack long before even the “L.A. Law” dude.  Plus, I couldn’t grow the required beard anyway. 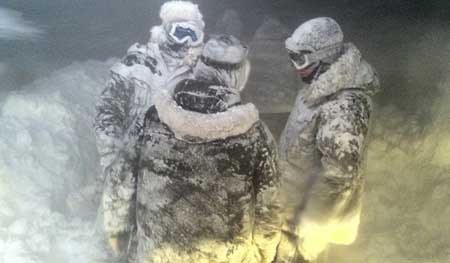 Combining elements from the aforementioned classic and countless virus-themed thrillers, director Reynir Lyngdal makes the unfortunate choice of presenting his “Frost” as that uninvited party guest still snoring on the couch at noon the next day, the found footage film.  That’s correct, friends.  Amateur shaky-cam photography in the middle of a damn blizzard; what could possibly make this experience any more incoherent?  Glad you asked.  Our current offering is in Icelandic with subtitles, and the tear stains on my notes serve as proof I’m not joking.

Sadly, “Frost” didn’t have to be this way.  Like the recent “Skinwalker Ranch” (which feels like a distant recollection of “Citizen Kane” brilliance after this), “Frost” betrays the conceit right from the word go.  A title card promising the deaths of all involved is ditched in favor of an artfully rendered opening credit sequence, a ballsy move within the subgenre.  Though a refreshing change from being openly lied to at the onset, it still begs the one-word query of “Why?”

Set atop a glacier (it doesn’t get much colder than that), “Frost” opens with two members of a research team discovering a deep chasm in the ice while out surveying.  Robert (Hallur Ingolfsson) attempts to explore, but is quickly spooked and retreats to the surface.  It’s up to physiologist Agla (Anna Gunndis Gu . . . What the hell is that letter?) to repel into the depths, a task she tackles with aplomb.  After a bright flash startles her, she returns topside to find that she had lost several minutes of time after the incident. 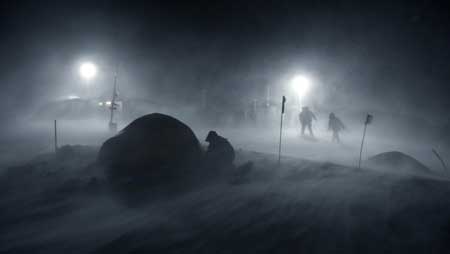 The next day, Agla’s boyfriend Gunnar (Bjorn Thors) arrives for a surprise visit (Can you really pay a surprise visit to a glacier?), having landed a gig directing a documentary of the team at work.  This may be the most logic-stretching coincidence in film history, and I’m being only slightly hyperbolic in that statement.

Following an evening of what must be fairly perspiration-free sex, Agla and Gunnar awake the next morning to an empty camp.  The snowmobiles gone, she assumes they’ve allowed the couple to sleep in and proceeded with the day’s business, though she cannot reach anyone on the radio nor find coordinates in the daily logbook.  With free reign of the facilities, the two embark on an insufferable date night, complete with romantic freeze-dried dinner.  Agla’s initial concerns over her comrades’ whereabouts never return once all day and into the evening.

Loud cracking and even brighter lights jolt them out of sleep and are closely followed by the generator conking out.  The next day they discover team member Arnar (Valur Fre . . . screw it, an Icelander) wandering outside, blood covering his face.  Before they can get him inside, he dies without a word.  They move him into a storage unit, initiating one of many moments in which Gunnar not only holds the camera when anyone else would put it down, but appears to accomplish the physically impossible by doing so.  Carrying a corpse clad in full winter wear with only one other person is a prime example of Lyngdal’s running contempt for the medium.

Agla begins the following day by promptly puking her guts up, a condition that could be morning sickness or the opening stages of something else.   A pounding from inside Arnar’s temporary tomb reveals the rapscallion alive (sort of) and mumbling “We woke something up.”  His journal details the coordinates of the team, and the three hop aboard the plow to locate them.

The real snowfall that reportedly served as both blessing and curse to the production becomes a heavy player once the focus shifts to open terrain, making what happens there more of a difficult cipher than entertainment.  Gunnar displays odd behavior while suffering from nosebleeds, and they arrive at the original cavern only to find more possibly-dead bodies.  Refusing to allow Agla down the hole, Gunnar descends into . . . something.  Apart from a jump scare courtesy of a zombified Robert, I honestly haven’t a clue what went on down there apart from shrieking and gunshots. 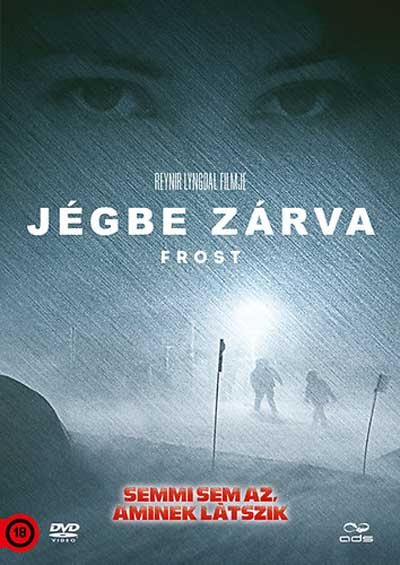 An awkward bounce back to base finds Agla convulsing on the bathroom floor, and segue ways into a final winking middle finger to found footage.  The camera pans back to reveal what I will say little about for fear of spoiling the fun.  However, it’s an ingenious device that could have saved “Frost” had it been introduced earlier, but arrives too late to accomplish any diversion from the tedium.

The twist is that there isn’t one, only a vague conclusion that could be described as unsatisfying if anything that occurred prior was remotely satisfying.  There is underlying invention and wit behind “Frost,” but it is buried by sheer laziness save the crafty game of switcheroo it plays three-quarters in.  Skip it and swing by my pad to watch a civil servant face-plant icy concrete instead.