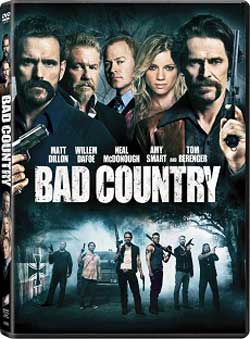 Directed by Chris Brinker, producer of The Boondock Saints and The Boondock Saints II: All Saints Day, the Blu-ray and DVD feature deleted scenes and Taking Down an Empire: On the Set, an in-depth featurette on the making of this modern, film-noir thrill ride. Co-starring in BAD COUNTRY is Kevin Chapman (TVs Person of Interest), Bill Duke (X Men: The Last Stand) and Chris Marquette (Alpha Dog).

Synopsis: When Baton Rouge police detective Bud Carter (Dafoe) busts contract killer Jesse Weiland (Dillon), he convinces Jesse to become an informant and rat out the Souths most powerful crime ring. So when the syndicate orders Carters death and Weilands IDd as a snitch, the two team up to take down the mob and the crime boss (Berenger) who ordered the hit. Matt Dillon, Willem Dafoe, Neal McDonough. Amy Smart, and Tom Berenger star in Bad Country, a gritty action thriller from director Chris Brinker, a producer of The Boondock Saints.

The film has a run time of approximately 95 minutes.  It is rated R for strong violence and language, and for sexuality and drug use.