Welcome to the first episode of The Future of Horror, an interview podcast featuring new, upcoming talent in horror, The show is a sister podcast to Horror News Radio, the official HorrorNews.Net podcast. With each episode, the show’s host, Doc Rotten, spotlights a director, an actor, a screenwriter, an effects artists, a film maker conquering hurdles and barriers to get their films made, to follow their passion, to make horror films. 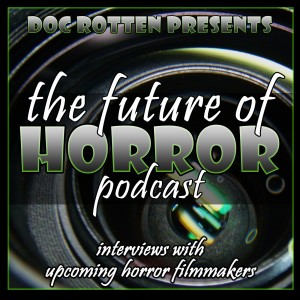 Mike Joy is set to film his first horror script Dead Afterlife. He has a producer behind the film and a director attached. Funding is being secured along with numerous crownfunding campaigns. The film is well on track to begin shooting sometime in the next 12 months. Mike joins Doc to recount what it has taken thus far to realize his dream of becoming a screenwriter and getting his film to the screen. He reveals how key networking was to his success, how believing in your script and sharing it with those you trust led him on a remarkable journey.

Just to give you an idea of what is in store for Mike Joy’s Dead Afterlife, take a look at the cast. Bill Oberst Jr. (Abraham Lincoln vs Zombies, Children of Sorrow, Circus of the Dead) stars as the antagonist while Andy (Grimm, Alien Rising) Gates lands the lead role as Donald Conlee. Supporting roles go to such famous names as Michael Berryman, Kane Hodder, Bill Moseley and Austin Idol. Jared (12/12/12, Alantic Rim) Cohn is set to direct.

You can find out more about Dead Afterlife on Facebook: www.facebook.com/DEADafterlife

Thanks for listening to the first episode of The Future of Horror podcast, subscribe today on iTunes and leave a comment to help support the show. Hopefully, the show will be an interesting, entertaining and enlightening journey into the film industry, from indepentent films to bigger budgeted studio pictures. As we continue meeting the incredible talent in front and behind the cameras, we will gain a glimpse of what it takes to create the horror films we love to watch: passion, persistence, talent, hard work and, maybe, a little luck and a little help from friends and mentors. Let us know what you think, email The Future of Horror at docrotten@docrotten.com.