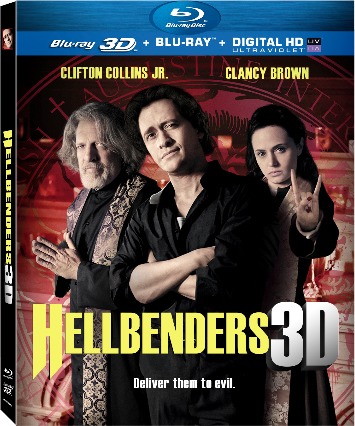 The horror comedy, Hellbenders arrives on 3-D Blu-ray (includes 3-D and standard version of the film plus Digital HD UltraViolet), DVD (plus Digital UltraViolet) and Digital HD on February 18 from Lionsgate Home Entertainment. An official selection at the Toronto International Film Festival, Hellbenders was written and directed by JT Petty (The Burrowers). Clifton Collins Jr. (Pacific Rim), Clancy Brown (Cowboys and Aliens) and Andre Royo (HBO’s “The Wire”) star in this twisted tale of rebel ministers who drag the worst demons back to hell. Shot in state-of-the-art 3D, Hellbenders includes an audio commentary with the director, a “making of” featurette and a behind-the-scenes featurette and will be available for the suggested retail price of $24.99 and $19.98, respectively.

There are demons so terrible that no mortal man of God could successfully drive them back to Hell. The only option is for the exorcist himself to invite possession and then commit suicide, dragging along the demon to damnation – so the Augustine Interfaith Order of Hellbound Saints – or Hellbenders – was formed. A group of elite, highly-trained exorcists, they live in a constant state of debauchery so they will be ready to go to Hell at any moment. When an infernal Norse demon called BLACK SURTR escapes into New York City intent on cracking open the gates of Hell, the Hellbenders must use every ounce of their debauchery to battle the demon and save the planet from eternal damnation!