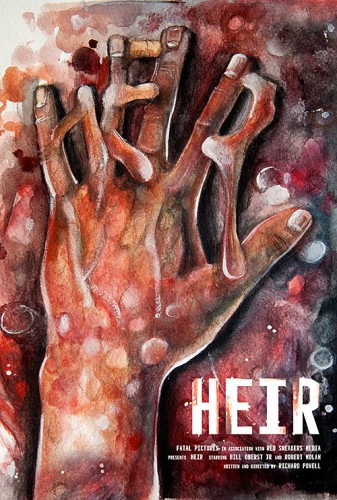 More information on cast and crew coming soon.
In addition to several new exciting collaborations, HEIR will also mark Fatal Pictures introduction to crowd funding as a campaign to fund the hard costs of the production will be launched shortly. This process will allow the film community a unique insight and stake in this disturbing horror tale.
HEIR stands to be the final short film from Fatal Pictures and we aim to knock this one out of the park! The combination of talent and passion we have brought on board so far means we have a great chance to do so but we can’t do it without the support of film lovers, filmmakers and day dreamers just like you!
Support comes in many shapes and forms, a “like” or “share” of our page means alot! Help us out and earn some of that Film Karma you may need your self some day!

After connecting with a stranger of similar interests online, family man Gordon and his young son Paul embark on an ill fated road trip in which Gordon aims to indulge in a secret passion. Before the day ends a horrible truth will be uncovered and a harsh lesson will be learned…

Disclaimer:
HEIR delves into the real life horrors of child abuse and explores the illness of those compelled to abuse children in a way that neither exploits or trivializes the sensitive subject matter. Our aim is to explore these issues in a way that is artful, respectful and poignant. That said, the film does deal with sensitive subject matter and our disclaimer should be considered before application to the project.