I love all these “reality” based horror shows out there now. One of the newest is called MONSTERS AND MYSTERIES IN AMERICA and it’s on the Destination America channel on cable and satellite systems nationwide. The show is actually in its second season and I’ve caught numerous episodes and they always leave me wanting more.

The basic premise is actually quite simple:

In communities across America, local legends tell of monsters hunting nearby woodlands, ancient spirits walking amongst the living, and alien creatures paying earth a visit. In MONSTERS & MYSTERIES IN AMERICA, hear directly from everyday people who have had close encounters with real-life folktale fiends.

The show airs on Sunday nights at 9 pm and this week we are treated to the following:

Skunk Ape – In the Green Swamp of southwest Florida, hundreds of local residents swear they’ve encountered a hairy hominid with a legendary stench. One dark winter night, when Robert Robinson decides to track down the beast, a hunter becomes the hunted.

Pascagoula Abduction – On the Gulf Coast of Mississippi, an alien abduction along the Pascagoula River becomes an American phenomenon. In 1973, two shipyard workers, Charles Hickson and Calvin Parker Jr., revealed their harrowing ordeal to local police. Now, a secret audio recording from the first few moments of their ordeal brings their claims to life as never before.

Lizard Man of Scape Ore – In Bishopville, South Carolina, vehicles are clawed during the night and locals suspect a lizard creature of unknown origin. Then, a teenage boy endures an extraordinary attack that shakes the small community forever.

Want to see a little of the action? Of course you do! 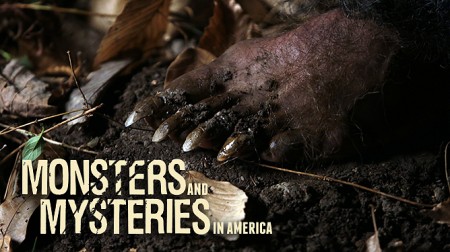