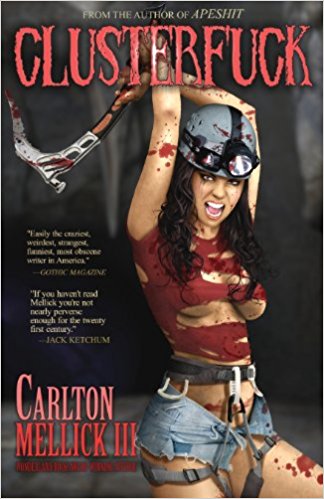 When it comes to Carlton Mellick III, I have difficulty deciding where to start. Clusterf*ck is one of five books released in 2013 by one of the most prolific authors of our time (including the highly praised Quicksand House), alongside five additional re-releases. Mellick has now released over forty books and shows no signs of slowing. He is often considered the real world Kilgore Trout (revisit Kurt Vonnegut’s works for that reference). The only thing that rivals his books’ titles are their cover art (a couple of examples: Satan Burger, The Baby Jesus Butt Plug, The Haunted Vagina, and The Morbidly Obese Ninja, to name a few of the more visually inspired ones). But don’t expect quality to be skimped in favor of quantity. On the contrary, this godfather of bizarro can write, and proves it on a quarterly basis.

Clusterf*ck is the sequel to Mellick’s 2008 release, Apesh*t (Avant Punk/Eraserhead Press), although you won’t need to have read the first to understand the second (but it’s totally worth it). Where Apesh*t is an homage to the cabin in the woods, B-movie horror film, Clusterf*ck goes underground to the caves for its scares. The Descent is a good reference point as far as an initial comparison, but aside from the common setting and a couple details here and there, these are vastly different stories.

The premise is as simple as expected; a group of frat boys take a some college girls on a spelunking trip, hoping to impress the ladies and hopefully score. They get to the caves, display their stereotypes and idiosyncrasies, and choose their “mates” for the duration of the vacation. But something goes horribly wrong, and suddenly the hormonally over-active explorers find themselves lost, separated from their alcohol, and realizing that they are not alone in the caves. Nothing all that new, nor unexpected, but it is handled so well, with such intelligent writing, and humor, and gore, and nods to standard horror tropes, that anyone who writes Clusterf*ck off as “same old, same old” is doing both the book and themselves a great disservice.

Unlike many horror movies, where our characters are introduced to us with a first name, a prevalent emotion, and a topless scene, Mellick makes sure we have plenty of details about each of the main players in his book before sending them to their fates. Each character has their own quirks as well as their own lovable qualities. There’s Extreme Dean, the bro who is “no slow, all go!” and due to a prank gone wrong has developed lactating breasts. Lance has anxiety issues manifested in a reoccurring nightmare about getting stuck between people in a very tight place (foreshadowing!). At a young age, Trent found himself at the crossroads of being a hero or being a bully, until some motherly advice helped form what he became. Lauren is in love with Trent and has prepared some very special, extra personal food for the group. Gravy ends up the first casualty, but refuses to go down without a fight. And then there’s Selena and Marta. While physically they couldn’t be more opposite (Selena possessing model-like features, while Marta is nick-named “Giant Gonzalez” after an old WWF wrestler), the two are indeed adopted sisters with very big secrets.

The creatures that Mellick terrorizes his frat boy (and girl) characters with are awesome in that “I’m not going to spoil it for you, just read the book” kind of way. There is a great sense of claustrophobia developed early on that lingers throughout the novel, and it is enhanced when our main characters start falling victim to the evils in the dark. Their interactions are fantastic; the reader finds it a little difficult to decide who to root for in Clusterf*ck thanks to the accurate portrayals of the Bro Code-following douchebags. The thing I really like about it is that, once things really get going, there’s no telling how wild and crazy it will end up, but with each page turned, it is already exceeding your expectations.

This is the kind of novel I could see being made into a movie, but I fear they’d fail to bring the same ominous feeling to the screen as occurs in the written word. That’s not to say I wouldn’t watch it; I’ve been known to like much worse. It’s a book that fans of Mellick will eat up like candy, but it doesn’t stop there. Clusterf*ck appeals not only to the bizarro fans, but also to straight-up horror readers as well. If you like splatterpunk horror, and if you can take a joke along with your gore, I can’t think of a better book. The odds are, if you give this one a chance, you’ll find yourself adding more Carlton Mellick III to your bookshelf in no time. 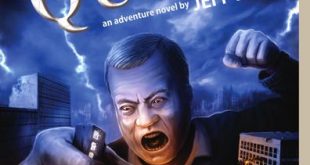 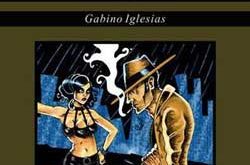