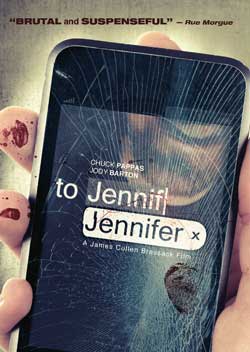 Joey suspects his girlfriend of two years, Jennifer, is cheating on him. He is so convinced that he enlists the help of his cousin Steven to create a Video Diary of his attempt to catch her in the act as well as to document the heartbreak she is putting him through. In an attempt to make her feel guilty, he intends to give this tape to her after catching her in the act.

To Jennifer is an interesting, if not wholly successful film. Following on from the well received Hate Crime, writer and director James Cullen Bressack has released a take on the found footage genre which is purported to be shot entirely on an iphone. This being the case, and an impressive achievement it is purely from a technical angle, the film warrants a great deal of attention as, if nothing else, this proves very clearly that absolutely anyone can go out and make their own movie; the key thing as always is the quality.

Joey (Chuck Pappas) suspects his long distance girlfriend Jennifer (Jessica Cameron) is cheating on him. With his friend Steven (Bressack again) he decides to travel across country to surprise her and hopefully catch her red handed. As part of the adventure Steven decides to document everything on his phone and make a film to show Jennifer how upset and angry Joey is.

After experiencing some problems getting on a plane they convince Martin (Jody Barton) to drive them to where Jessica is but unfortunately Martin is more interested in getting high and having fun then he is in Joey’s emotional state and there is soon conflict. As the intensity of the clashes increases they lumber slowly towards Jennifer who is seemingly blissfully unaware of the approaching trouble. 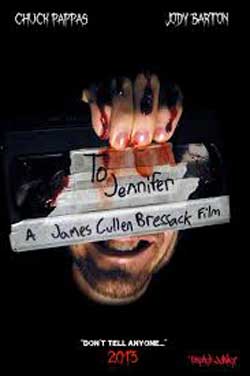 Amidst the deluge of found footage films there are still interesting gems to be found and To Jennifer is almost, but not quite there. Due to the extremely low budget nature of the film great emphasis is placed on the characters with much of the 80 minute running time being taken up by their interactions as opposed to anything actually happening. For the most part this works although as tempers rise and personal issues are revealed everything becomes a little too “shouty”.

When this happens any tension created by the film is lost and you find your interested waning somewhat. That said it is easy to believe that the characters react as they do when you eventually become aware of the full story and the true nature of the road trip and perhaps the film is better upon reflection than in real time, but this realism is challenged by the standard and well documented generic issues.

As with the many found footage films though the biggest problem is in the believability of the footage the reasons for the recording. For the most part the dialogue and script is effectively realistic enough but there are times, particularly involving incidental characters, when this isn’t the case and the lines become a little clunky and forced.

The other issue with believability comes when the action increases and the film gets to the horror elements of the film. There is no justification for any of the characters to continue filming and there are several moments when most people would simply have used the phone to call the police rather than to document events. The ending itself is also a little predictable but is visceral enough to satisfy anyone who has invested their time in the film.

The fact that this film exists at all though must be applauded and the skill Bressack has displayed in editing and compiling the footage is impressive. This is a film for the social media age and definitely taps into the fears that anything and everything we do can be recorded.

Ultimately To Jennifer doesn’t quite deliver on its early promise but does show how far you can go with a good idea. There are good moments but not enough consistency to ensure those found footage failings are ignored, especially in the third act. However, Bressack is definitely a filmmaker to watch for the future and it will be interesting to see where he goes next.