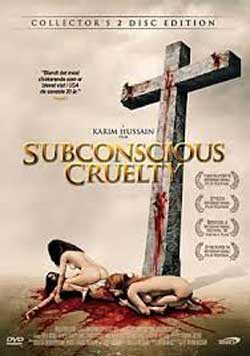 Subconscious Cruelty” is divided in four segments: Ovarian Eyeball – a naked woman is sliced by a sharp blade and an eyeball is removed from her belly. Human Larvae – a deranged man that hates his sister that is pregnant kills her newborn offspring and she during the delivery. Rebirth – a group of naked people rolls around in mud and blood. Right Brain/Martyrdom – religious symbolism associated with gore and sex.

Subconscious Cruelty is a film split into four separate and seemingly unrelated parts, all written and directed by Karim Hussain. It’s Hussain’s first journey into the worlds of both writing and directing, a departure of sorts from his normal job as cinematographer (a role he played on The ABC’s of Death and Hobo With A Shotgun as well as a couple episodes of television’s Hannibal). The film is very artistically done, and the visuals are often very graphic, sometimes horrifyingly so. But the stories that go along with each section are so buried in symbolism as to render them confusing and disjointed at best. Or are they supposed to feel like dreams (or more appropriately, nightmares), and so the confusion is intentional? Either way, it is certainly something to experience. 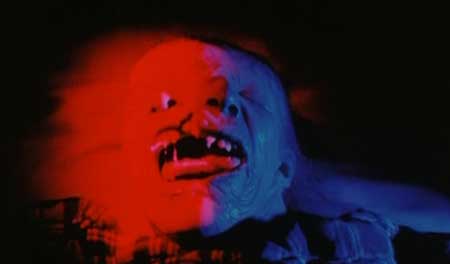 The movie opens with a brief dialogue about how we, the audiences, often use film as an escape from our horrible lives, a retreat that can only last for so long before humanity rears its ugly head once again. Then we get a quick run-down on the difference between right brain and left brain activity, complete with colorful visuals, before we find ourselves looking in on a naked woman lying on a table. A towel is put over her face, then a scalpel slices her open. A hand reaches inside her and pulls out an eyeball. So, I guess the title “Ovarian Eyeball” kind of says it all for this section, doesn’t it? 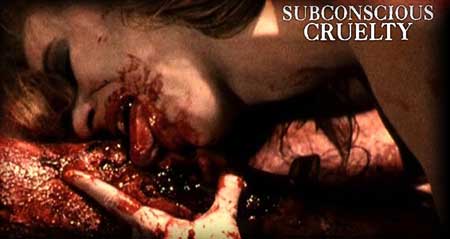 We quickly shift to a guy peering through an open doorway upon a sleeping woman (this is now part two, titled “Human Larvae”). In a very French Existentialist kind of way, he proceeds to explain his lost dreams, his hopelessness in life, his misery, and his obsessions. He has often watched her have sex, sometimes he’s had sex with himself while watching, and he is fascinated by the concept of conception and how sperm could create such a change in a female body. Instead of looking into a sex education class, he decides that he not only wants to have sex with her, but he becomes enamored with the idea of destroying creation. Did I mention that she is his sister? This is the longer section of the four (as well as the most straight forward), and it is also the most brutally graphic. It is bloody and gory and pretty disturbing, and his nightmares of women’s periods are the least of the nastiness. It concludes with one of the most disturbing things I’ve seen in quite some time, so be warned. 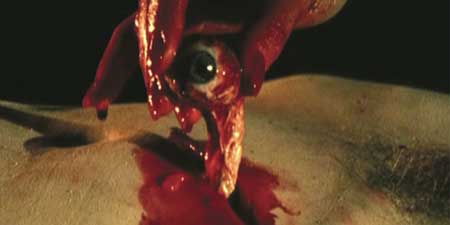 In “Rebirth,” we just have a bunch of naked people rolling around in a field, “having sex” with nature. When holes are dug, there seems to be blood underground. When tree branches are broken, they bleed. And when a man fellates the knife between a woman’s legs, his mouth bleeds. There isn’t much more to say about part three that can’t be imagined, nor is there a plot to it. 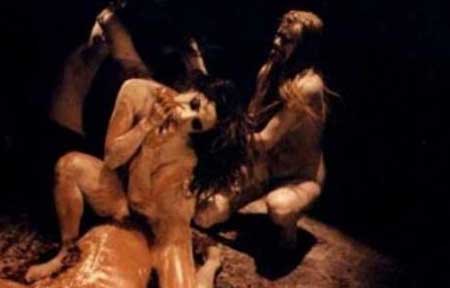 Finally, we get to the “weird” part, “Right Brian/Martyrdom.” A business man has what seems to be a long and stressful day, so he goes home and masturbates to hardcore p*rnography on his television. He wipes it on a coin which he then flicks at his tv, leaving a bit on the screen. Then he dreams about his penis being torn apart by hooks (imagine Hellraiser, but with a penis instead of Frank). A crucifix necklace is melted down and injected like heroin. A Christ-type figure cries outside a church, then is carried inside and chewed on/eaten by naked women before being peed on and having his organs pulled out and used as sex toys. You know, your normal Sunday. 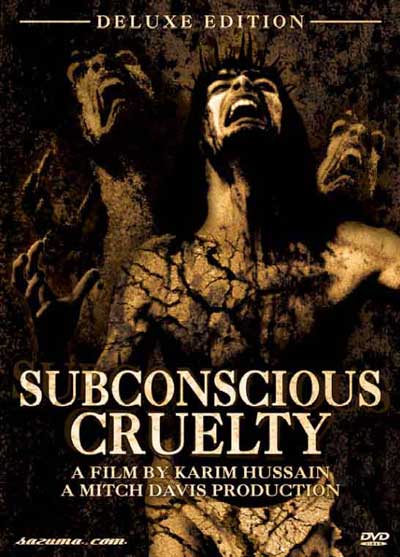 Subconscious Cruelty is a movie that I go back and forth on. There are horrifying images on the screen throughout, things I did not expect to see, and I appreciate that very much. So, if visuals are enough to grab you and shake you, then this is a great film for you to go out and find. However, if you need more, like, say, a linear story, or well-crafted characters, then you need to look elsewhere. It’s similar to a David Lynch-type nightmare put to celluloid, but without that intangible “something extra” that sets Lynch aside from the others. The director (Hussain) has promise, that is for sure. The acting is fine, the effects range from good to great. But, as much as I hate this saying, I have to employ it here: this movie is not for everyone. Don’t be surprised if, after watching this movie, you hear yourself asking out loud “What did I just watch?” 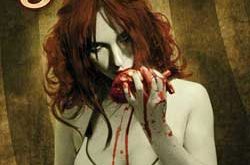