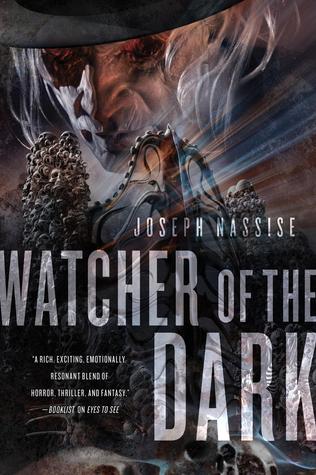 WATCHER OF THE DARK
By: Joseph Nassise
Tor Books
301 Pages

Jeremiah Hunt is consumed within the most precarious of dilemmas. While hiding out in a seedy Los Angeles motel he’s taken against his will by a band of misfit thugs. Taken to Carlos Fuentes he’s presented with a sinister ultimatum. Hunt can either work with his team in finding a lost, ancient artifact capable of opening the gates of hell or suffer at the hands of his wraith and risk his estranged loved ones meet their demise in cold blood. Will Hunt’s paranormal second sight be enough to overcome adversity or will he be forced to unleash apocalyptic evil to one and all?

Author Joseph Nassise’s first person persona is immensely descriptive of not only raw emotion but each accompanying stimuli. Each of the senses are exploited in near lucid grandiose as our imagination bursts free of the norm. We virtually see, hear, feel, smell and taste the action as it unfolds page after page. It’s rare a reader can be so captivated and invested into a tale, especially at the hands of an author they’ve been previously oblivious to.

The prose and style of first person perspective is executed flawlessly. We get into the head of one Jeremiah Hunt, feel his disdain. His sarcastic monologue is a welcome comedic break from the bleak and sorrowful setting constructed around him.

Hunt’s ability to see radiant energy amongst inanimate objects, steal the sight of ghosts and communicate with the dead is highly innovative. As horror and dark fantasy fans we’re virtually saturated with tales of the dead and spirits from beyond. Nassise’s plot design is refreshing and intense breaking the mould of countless story lines preceding these Chronicles.

Allegories and similes such as a double exposed photograph reference dramatically explains otherwise very complex concepts. This author seems to realize the need to accompany his collective readers along their journey as opposed to coming across as stuffy or pretentious with story variables. We get the picture crystal clear, causing his audience to rip through the pages with ravenous appetite for more.

The delicate blend of mysticism, esoteric elements, the occult and paranormal makes this tale one of a kind. We want to know more about what makes Fuentes and his band of thugs tick, moreover what moves Hunt and his quest beyond.

Despite this volume being a third installment in its respective series, Watcher of The Dark could readily be enjoyed as a stand-alone novel. The author deploys minimal exposition for the virginal reader but at the same time never losing track of the avid die-hards that have followed the Hunt Chronicles from day one. Rather enjoyed on its own or consumed in sequence this odyssey is a bona fide thrill ride that refuses to relent until the final pages.

If you’re brand new to Joseph Nassise I highly recommend beginning with any of the Hunt Chronicles: Eyes to See, King of The Dead or this installment Watcher of The Dark. As a horror aficionado for the past thirty years and reviewing over a hundred novels for horrornews in the past two years I can honestly state that few endeavors have had as much of an impact as this tale. Nassise reminds me of a young Robert McCammon in his ability to flawlessly beckon a large audience appeal. His story unfolds like a virtual film reel unleashed within each reader’s imagination.