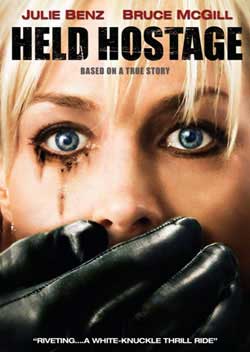 What if the ultimate nightmare is just the beginning? After three masked gunman break into her home, bank manager Michelle Estey (Julie Benz, TV’s Dexter) and her young daughter are duct-taped with explosives and threatened with death unless Michelle cooperates in a daring bank heist. Terrified, Michelle agrees to their demands. She and her daughter are left unharmed, but Michelle soon realizes that, after the robbery, they are still very much in danger. Unguarded by police, shunned by her colleagues, she becomes a suspect in the crime and her shady past exposed in what becomes the fight of her life in this tense thriller.

Julie Benz stars in an intense thriller based on a true story about a bank manager named Michelle Estey who is held at gunpoint by 3 masked gunmen. Researching the bank, her activities and the flow of currency, they demand that she enters the bank, places all the money in a bag and brings it to them while she wears a wire taped with dynamite. Julie didn’t see it coming when the 3 men break into her house and kidnap her daughter as reassurance to Julie doing as they say. The demand is simple. Bring us the money or we kill your daughter.

Forced with no other choice, she walks in and takes the money to them only alerting her coworker per a written message to not alert the police until she calls back. Over $300,000 is taken and declared missing as the media doesn’t waste anytime jumping on the event.

Life suddenly becomes a challenge as the event leads to the possibility of her being a suspect rather than a victim. As her and her daughter Bree are assigned a hotel room and a rental car, she tries to cope with the trauma of the incident and the backlash from law enforcement and her coworkers. Its her word against the fact that she robbed a bank in question which in this case is not believed entirely. Which seems to suggest that the police aren’t taking her story at face value. Michelle’s past is brought into question as well as the possibility that she was working with the bank robbers, namely one Chris Clark. A history of debt, bankruptcy and a string of questionable past occurrences that seem to be out of place especially for a bank manager all further complicate the case as the police look for the alleged bank robbers. While viewers can explore the details of the true story on there own I believe the movies purpose is to exploit the ignorance of the law enforcement in situations like this. In other words, looking on the wrong places instead of the obvious facts.

The film seems to be somewhat marketed to the horror genre, more specifically fans of torture p*rn titles. Though it’s fair to say that the content is really more in line with TV movies and suspense dramas. The horror only really occurs in slight situational circumstances such as the initial kidnapping. Though I found all those aspects to be on the lighter scale.

Filmed in Langley, British Columbia, and parts of Canada, the new feature directed by Grant Harvey was originally listed as a TV movie that went to DVD.