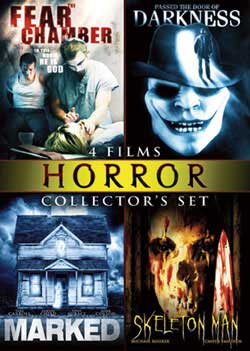 Serial killers and supernatural all rolled into one, this volume 8 from Echo Bridge Entertainment brings together 4 previous rentals under one roof with a nice collection of horror titles. Available at Walmart for under $10 (or less), this is a sure way to save some space on your movie shelf and get 4 cool films all at once. Highlights for me are “Marked” and “Passed the Door of Darkness” which I’ve been wanting to see . Stay tune into HN as we post reviews on all 4 titles in the future!

Synopsis
THE FEAR CHAMBER
In Los Angeles, a serial killer is prowling the streets, murdering young, healthy women for their organs. Detective Nick Ferguson (Rhett Giles, Contract Killers) isn’t far behind in the trail of dead bodies, but hallucinations and nightmarish visions thwart his efforts…until he realizes that the visions themselves may be the key to closing in on the sadistic murderer.

PASSED THE DOOR OF DARKNESS
Detectives Chris Malloy and Murphy MacCasey comb through L.A. in a search for “The Shadow of God,” the most sadistic serial killer the city has ever seen. As every murder scene is more horrific than the last, and every clue hits closer to home, the detectives slowly realize “The Shadow” is stalking them. With one shocking twist after another, their hunt for “The Shadow” leads to an unexpected, bloody—and deadly—climax.

MARKED
Determined to find answers about her father’s mysterious murder years earlier, Diella searches for paranormal activity with a research team and high-tech equipment. When supernatural occurrences point them to the man who killed her father, their path to solving the murder becomes more confusing—and more deadly. Whether the activity is a clue the police missed or a warning to stay away, Diella and her team will slowly discover in a terrifying descent into the mind of a killer.

SKELETON MAN
In the wilderness of the Pacific Northwest, four top soldiers in the Army Special Forces disappear on a routine training mission. Michael Rooker and Casper Van Dien lead a crew of eight top-notch soldiers to track down the inexplicable demise of their comrades.

Though the soldiers have no idea what they are looking for, their search leads them to an old, blind Indian who tells them the tale of Cotton Mouth Joe—the bravest and most ferocious warrior in an Indian tribe that, four hundred years previously, slaughtered his entire tribe in a fit of rage. Only one young girl was spared—the Morningstar. According to legend, she alone has the power to send Cotton Mouth to his mortal grave.

The soldiers believe the old Indian is crazy and that the story is nothing more than a myth…until the terrifying spirit of Cotton Mouth ominously materializes upon a black stallion, wielding a lethal spear. The Skeleton Man has returned from the depths of hell to rain death and destruction upon any mortal who dares cross his path…this time it is the soldiers who are locked dead in his sights.