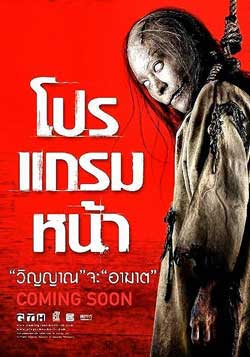 A young projectionist, Chen, decides to illegally record a newly released horror movie. After falling asleep during the screening, he wakes to find that his co-conspirator has disappeared and left his camera behind. Suddenly, the horror movie that they were watching in the cinema starts to happen to them in real life.

You may recognize Sophon Sakdapisit as a screenwriter for Thai blockbusters such as Shutter and Alone. Coming Soon is Sakdapisit’s directorial debut, and it’s apparent that he’s much more competent writing scripts than calling the shots. Although this movie is proof positive of Sakdapisit’s screenwriting talents, the direction, however, falls short of the obvious enterprising script. The scares are ceremonious, short, predictable, and safe.

The movie starts off promising, as the movie within the movie, titled “Evil Spirit”, tells the true story of Shomba, a crazy old zombie eyed witch woman with patchy, frizzy hair, and a limp. Shomba, to compensate for the loss of her own children, abducts and tortures village children, gouging out their eyes so they will believe they are in their own homes and that she is their mother. The villagers begin searching for the children and once they find them in Shomba’s possession, she is hung from the rafters of her very hut.

Being that “Evil Spirit” is a supposedly “true story”, it is anticipated that movie goers will flock to the theater, and as always, there’s always someone out there looking to make a quick buck. Hence, enter the movie bootleggers.

Projectionist Chen (Chantavit Dhanasevi) has money issues and is getting tired of pawning watches so he readily agrees to rip off the ‘Evil Spirit’ film, by recording it off the cinema screen in one late night illegal projection. But things quickly start falling apart when Shomba begins revealing herself off screen and people associated with the film start to disappear and mysteriously show up in ”Evil Spirit” as, I will only say at this point, extras.

When Chen’s boss mysteriously disappears, who is also involved in the movie pirating, and Chen experiences Shomba up close and personal, he becomes curious. While Chen is recovering from ghost shock, his ex-girlfriend, and theater usher, Som (Vorakam Rojjanavatchra) discovers that the “Evil Spirit” filmmakers had experienced strange events during a test screening, in addition to the secret that Shomba’s body was never found. The curious couple decides to investigate matters further by traveling to Shomba’s once occupied abode.

After encountering several villagers with eyes removed, the dynamic duo find Shomba’s former home, a dilapidated and rat infested palace of pleasure. One thing leads to another and Chen has a mishap that sends him to the emergency room where he discovers from a doctor that Shomba survived the hanging. And it is there that we get to see the real Shomba, alive, well, and happily roosted on a park bench located at the hospital.

Puzzled, Chen and Som do a little more investigating and reveal the truth of the disappearances. A little déjà-vu sets in and suddenly Chen is on the big screen. That being said, I’ll leave the rest for you to see, or not to see, no pun intended.

A combo of The Ring, The Eye, and Slit Mouthed Woman (Kuchisake) this movie had minimal scares. I mean, that’s why we watch horror, right? To be scared beyond our imaginations? Do not expect edge of your seat horror in this movie. What you can expect is an average account of the supernatural with good camera angles.