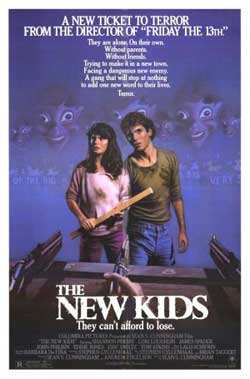 A brother and sister arrive in a small town to help their relatives run an amusement park, and they find the town is terrorized by a local street gang.

Movies like The New Kids aren’t like paintings, which can be interpreted many ways but ultimately can only be seen from one perspective.
No, movies like this are more like sculptures. You can approach them from many, many different angles!
And it is the way that you approach it that ultimately defines how good it is, and whether or not it is a worthwhile experience in entertainment and mental stimulation. 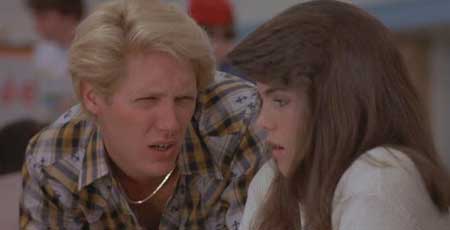 ……..just once, I’d like to review a film like Snakes On A Plane.
Things are never simple.

Loren (Presby) and Abby (Loughlin) are the aforementioned New Kids from the film title. Following the untimely death of their American-as-apple-pie parents, they travel to Florida, where they move in with their very slightly less American-as-apple-pie aunt and uncle. It is while trying to fit in here, at the local high school, that they find themselves victimized by a gang of uncouth youngsters, led by the mysterious Dutra (Spader).

Personally, I feel this film has three increasingly complex layers. 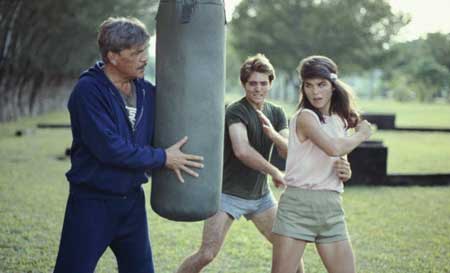 First of all, it can be approached as a typical horror/thriller, something to watch for cheap thrills, or to leave on in the background while you make out with your sweetheart (Oh Americanisms, you truly are infectious!)

In this instance, it falls completely and utterly flat, which is strange considering this is coming from Cunningham, the same man who directed Friday the 13th. There is but one moment in the entire film that can legitimately be labelled as horror, and it’s the kind of moment that only really seems scary when you place it in contrast to the rest of the film. But if you place it in the genre of horror as a whole, it is PG-13 at best, barely a splatter of gore and about as scary as catching Freddy Krueger clipping his toenails in a pink bathrobe. 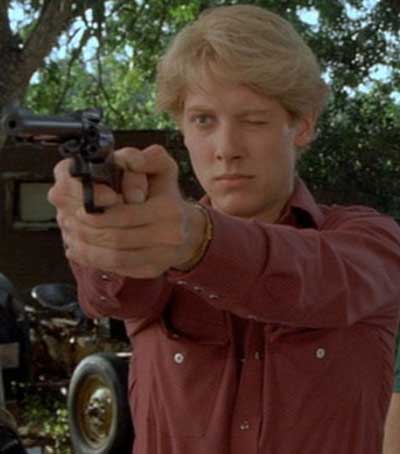 To be honest, the film is most reminiscent of The Karate Kid, or at least the first hour of that film. Minus the karate aspect and the charm of Mr. Miyagi, that’s a fairly bland concept to be spread so thinly over the nearly 2 hours running time.

And let’s face it, this is the 80s, we all know how underdog stories like these tend to end. 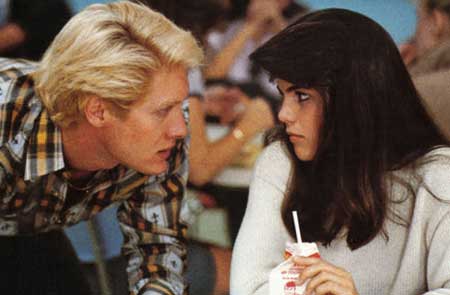 There is a sort of neat balance between this and the kids helping their relatives to renovate an old carnival. However, this feels underdeveloped, and its only real purpose is so that there is a colourful setting for the films finale. Which, to give the film credit, isn’t a bad thing, but it could have been so much more.

So even as a typical popcorn film, this is still pretty mediocre.
2 rice puddings out of 5.

Despite this however, I found myself fascinated by The New Kids.
How can this be, I hear you ask?
It has a dull, predictable narrative, I hear you argue.
There’s less blood in it than an overcooked steak in an old-folks home, I hear you cry!

Well, I enjoyed it because I, quite pretentiously, approached it as a scholar. 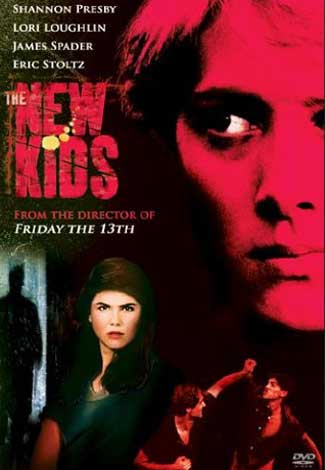 I only saw The Karate Kid quite recently and one of the things that stood out to me was the beach scene. You know, where all the guys are playing football in really short shorts, laughing, joking and unironically wearing belly tops?
My reaction to this was probably the same as everyone else that has seen it in this age of Facebook, skinny jeans and Rupaul’s drag race.

That’s a little bit gay…
I want to emphasize that in no way do I mean this to be read in a derogatory manner. There is a degree of homosexual subtext in The Karate Kid that is heavily emphasized due to the fact that this is a more naïve time. It’s subtle and doesn’t overshadow the main story, which is where the real meat of the entertainment is at.

The New Kids, however, has that same homoerotic tension and it is pretty much bursting at the seams with examples of this. At first, it came across as standard 80s. The brother and sister get along really well and opening shows a montage of the two of them working out together with their non-dead Daddy, slow motion vaults and cheesy music all around. It’s the kind of thing that Molly Ringwald would be right at home in.

Yet, this never, ever, lets up, and it’s a little suspicious how persistent it is throwing around campy montages and Boy-Next-Door caricatures. It was only at the halfway point that the penny dropped, when Loren wrestles with Dutra, who is only wearing a pair of Y-fronts and a slightly confused expression. This isn’t a film about Loren and Abby being bullied. This is about Dutra being trapped in the closet and trying to deal with it.

Taking little details into account, it all makes perfect sense. Why is Dutra, played by the ridiculously handsome, almost girlish, James Spader, leading a gang of redneck brutes? They all wear denim jackets and wife beaters, whereas he wears floral shirts and neatly cut trousers. At several points, characters suggest that Dutra is ‘pretty strange’, that he has ‘weird habits’, yet he seems to be the most down-to-earth guy in his group of misfits, all of whom fear him inexplicably.

He never throws a punch, he only slaps people.
In Abby’s shower scene, he ‘attacks’ her, but never actually looks at her.

His parents are never seen and he does drugs, both highlighting his status as an outcast.
And it is it really coincidence that he so often hits people in their ‘manhood’?

His behaviour towards Abby is confusing at best, but he relishes his encounters with Loren, grinning madly even when he is being beaten. Why?
Because Loren seems just camp enough that he ‘might’ be gay as well and that is something that Dutra needs. A way out, someone to potentially relate to.

There are multiple ways to read many aspects of the film, the ending in particular being a fascinating example. Yet, there’s no denying the homosexual subtext that underlines everything. It is mainly about Dutra, but there is certainly an element of danger for Loren as well, as his masculinity is threatened. The ending itself may initially be read as plainly unsatisfying.

However, what if this is deliberate?

What if Loren, in the pique of his physical ability, has won the battle but secretly lost the war?

It’s difficult to tell what stance Cunningham is taking in the issue, considering Dutra is the villain, yet comes across as so sympathetic, despite his actions. It seems likely that he is advocating liberal ideals in the interest of homosexuality, though he employs this conservatively during what was still a very conservative era. It is unravelling this mystery, as well as others, that make The New Kids such a fascinating enigma and an excellent case study for the hungry film scholar. 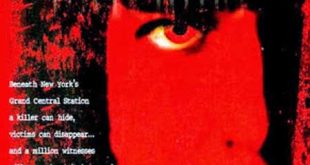 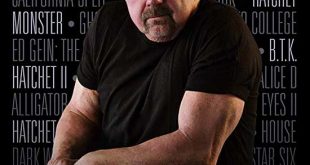