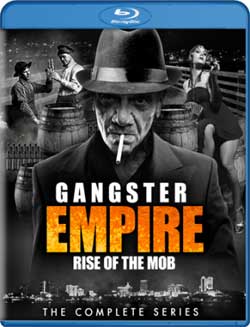 Violence and corruption pulsed through the soul of the Gangster Empire during the heyday of Prohibition and the Atlantic City Boardwalk.

This mega documentary comes to us with over 4 1/2 hours of pure old school mafia history. The bluray is divided into 6 parts on 1 bluray that takes us thru the past starting with the early days of Prohibition and leading up to Godfather eras. Of course all your favorites are here such as Al Capone, Baby Face Nelson, Lucky Luciano, and such. But what really works here is a thorough analysis and overview of the Gangster era and how it evolved over the years. Whether films like “Good Fellas” or “The Godfather” inspired you to seek out more on this part of history, you finally have the chance to get the full scope from origin into modern times. Learn about early Chicago era and the Atlantic city gangster years right up to the full blown Italian mobs!

“Gangster Empire: Rise of the Mob” was a TV mini series that was re-offered on bluray per Mill Creek Entertainment. The documentary was produced by Kevin Hershberger (Lionheart Productions), who has been noted for several other award winning documentaries. Coby Batty narrates this series.

As posted by Mill Creek:

Roam through the dark and smoke filled history of the most ruthless men and family enterprises that changed crime in America! From bootlegs to urban battlefields this groundbreaking series traces the origin of the gangs that dominated criminal activities and invented their own codes of conduct. Meet the legendary figures and discover the real story behind the violence and corruption that pulsed through the soul of the Gangster Empire!

To learn more about Gangster Empire: Rise of the Mob (2013), you can check it out on bluray here