FX Legend, Director Robert Kurtzman joins co-hosts Doc Rotten, Dave Dreher, Santos (The Black Saint) Ellin Jr., Thomas Mariani and Vixen to discuss his new Haunted Attraction, Mad FX Lab, and his school the Kurtzman Institute of Art. Thomas offers up the recommendation this week, The East, and Dave once again delves into the horror news of the week. Doc has another exciting giveaway this week as well. Woot!

00:30:00 – Introducing HORROR NEWS RADIO
That’s right, after 24 episodes, we finally have an official name, Horror News Radio – the Official HorrorNews.Net Podcast. A special thanks to Dave Dreher, Santos Ellin Jr., Thomas Mariani and Vixen, Doc’s fabulous co-hosts who have worked hard the past 6 months in developing the podcast and providing some of the best entertainment on the ‘Net. Also a shout out to Michael Joy and Michael BoneDigger at HorrorNews.Net for their continued support.

00:03:10 – Interview with FX, Director, Horror Legend – Robert Kurtzman
Robert Kurtzman joins the grue-crew this week to discuss and promote his Haunted Attraction, Robert Kurtzman’s MAD FX LAB, opening this Halloween season in Crestline, Ohio. Robert Kurtzman is one of the originators of K.N.B. EFX Group formed in 1988 along with Gregory Nicotero and Howard Berger. He left K.N.B. in 2003 to begin Creature Corp Studios and Kurtzman Institute of Art, teaching and training the future of Film EFX. Robert shares how the Haunted Attraction began and spotlights a few of the show’s hightlights – and shares how they moved the house in which the attraction is stages was moved from one location to another. Later in the season on October 29, 2013, MAD FX LAB will host a VIP event supporting MAD FX LAB and the Kurtzman Institute of Art. The event also features special guest Robert England, Beki Ingram and David (House) Greathouse from the hit TV show Face Off, director Gary Jones, Chris Hahn, and cast members of SyFy’s Axe Giant, composer Ed Douglas of Mydnight Syndicate and comic book artist Mark Kidwell with autographs, photo ops, music and more – tickets are limited!

00:58:35 – Horror News of the Week for 9/23/2013
Dave Dreher’s horror news of the week begins with the announcement that Jamie Lee Curtis is returning to horror on TV with Final Girls on ABC Family. Next up is the season finale of Showtime’s killer hit, Dexter, which contains a teaser for Penny Dreadful. Coming soon from director Neil Marshall is the remake of the hit found footage horror film, Troll Hunter. It is being reported that Sam Raimi is currently working on Army of Darkness 2. Dave shocks the crew with the all-nude Horror Haunted House with the Naked and Scared Challenge.

01:20:00 – What have you been watching – The East
Thomas Mariani returns with the recommendation for the week bringing a review of The East to the crew. The film is directed by Zal Batmanglij and features Brit Marling, Alexander Skarsgard and Ellen Page. The script follows an Eco-terrorist group who is infiltrated by an undercover operative only to discover more than she bargained for. Thomas shares his views on the film and also recommends Brit Marlin’s previouis feature, Another Earth.

01:25:00 – Listener Feedback
Another exciting giveaway this week, the grue-crew have two (2) copies of the Fright Night 2: New Blood blu-ray. All you need to do to qualify is send an email to docrotten@horrornews.net with Fright Night 2 in the subject line. Please provide your name and address in the email. The deadline for this giveaway is October 6, 2013. We will announce the winners on episode 27 of Horror News Radio. 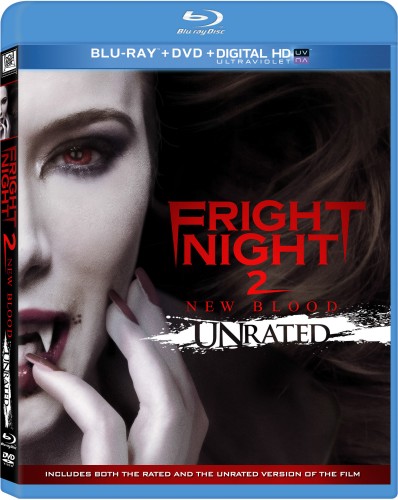 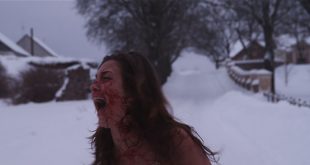 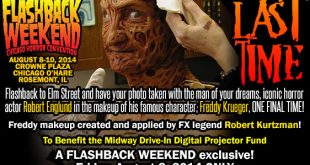