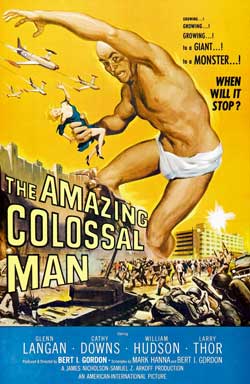 Lt. Col. Glenn Manning is inadvertently exposed to a plutonium bomb blast at Camp Desert Rock. Though burned over 90% of his body, he survives, and begins to grow in size.

Shortly before his death in 1924, famed Science Fiction Author Homer Eon Flint (The Man in the Moon and The Lord of Death) wrote a short fiction novel named “The Nth Man.” it was published (or serialized) in the “Amazing Stories Quarterly” in the spring of 1928 with a cover done by Frank R. Paul who was renowned for his “Amazing Stories” covers. Flint is considered in many circles as a pioneer of the genre achieving success especially with his “Dr Kinney” series of stories. Flint also wrote many scripts for the then new and expanding movie industry.

The story behind “The Nth Man” involved a man who grows to be 10 miles high and the rights to the story had been in possession of acclaimed genre producer James H. Nicholson of American International Pictures, a studio known for producing and distributing many movies, fast and cheap. AIP were responsible for many films in both the sci fi, horror and fantasy genre that many movie lovers, to this day hold in very high regard. Some of my favorites (Which were also produced by Samuel Z. Arkoff) include the iconic Corman/Poe/Price films such as “The Raven,” “House of Usher,” and even “Tales of Terror” some of which also starred Boris Karloff and Peter Lorre. AIP was known in Hollywood as the heavy hitters regarding returns on their investments and Nicholson was astute in holding on to properties that he knew would see the light of day but only when the opportunity arose. In the late 50’s, as far as “The Nth Man” was concerned, the time was quite right indeed. 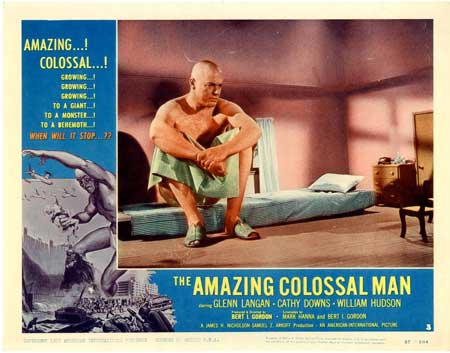 “The Incredible Shrinking Man,” directed by sci fi mainstay Jack Arnold (It Came From Outer Space), was released in 1957 and was a successful outing that instantly garnered a cult status. Watching the success of TISM carefully, Nicholson decided to dust off his story by Homer Eon Flint and get down to the nitty gritty and attempt to cash in on the current trend of mutated and irradiated people and creatures. Specifically people who grow to extraordinary heights in direct contrast to Arnold’s earlier film. Nicholson saw an opportunity and took it. The result? “The Amazing Colossal Man.”

Roger Corman was at one time attached but he bowed out and some rewrites were needed since a treatment delivered was too light in tone and came across a tad goofy and inexplicably comedic. Charles B. Griffith, who penned the brilliant “Bucket of Blood” was to blame for that. Nicholson, quite frustrated, turned to Bert I. Gordon (Mr BIG to you, buddy!), who by that time had only done “King Dinosaur” and “The Cyclops” (which WPIX channel 11 in NYC used to use for it’s Chiller Theater opening) with Lon Chaney Jr. Gordon replaced Griffith with Mark Hanna, who would go on to pen “Attack of the 50ft Woman.” Once the rewrite was done, Nicholson and Arkoff gave Gordon his budget and production started on “The Amazing Colossal Man.” The movie begins with a generic intro where we are shown a convoy of army trucks driving on a desolate road in Nevada while some drum / marching music plays over the credit sequence. 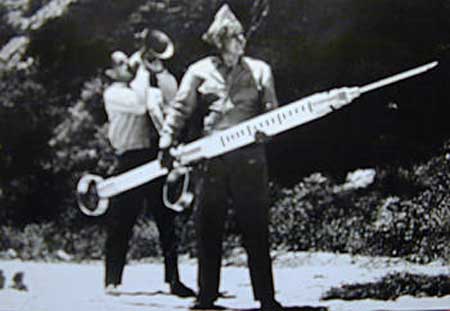 After that we are introduced to our lead character. Television actor Glen Langan (The Count of mote Cristo) plays Lt. Col. Glenn Manning, who is a stout, deep voiced Army Officer overlooking the testing of a plutonium bomb. While waiting in the trenches with his men a countdown begins for the detonation but something goes awry and the explosion is somehow delayed. To add to the problems a small plane in trouble crash lands right in the vicinity of the bomb tower. Manning, after being told of the crash, decides to run out into the dark to see if there are any survivors of the crash. Well, things don’t quite work out that way as he is caught in the blast of the delayed explosion while looking in the dark for the downed plane. He is almost literally blasted into atoms by a wave of fiery radiation and as he tries to shield his eyes his clothes, hair and skin are shredded away. He does survive and at the hospital’s burn unit he is being worked on frantically with the Doctors in shock and awe that he was able to withstand the bomb going off. They discuss and try to find out how this could have happened as 90% of his body is severely burned. Incredulous as it may seem there is a normalcy to the whole proceeding as Manning’s fiance, Carol (Cathy Downs) waits for word on his recovery. 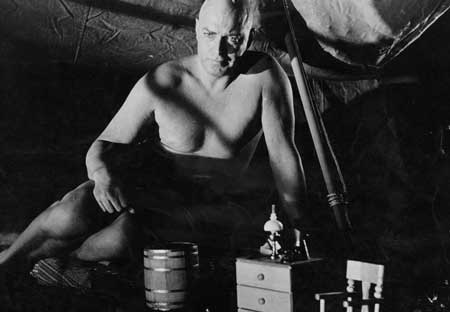 It seems that the Gods are smiling down upon Manning as a nurse checking in on him finds out that his skin has been healing and upon the removal of the face bandages, we find out that Manning’s burns are completely healed. At this point everyone from the burn unit Doctors to the Army Base Medics and Soldiers argue about how Manning could be healing so quickly much less be able to survive the explosion. As they continue their arguments and theorizing, Manning seems to be affected in a different way.

He appears to be actually growing. Carol looks for Glenn at the hospital but finds that he has been moved by Dr Lindstrom and Dr Coulter to a research Center in the middle of the desert. Why, do all these movies take place in the desert? Anyway, she is shown into the what may be the darkest, most starkly bare hospital facility ever filmed. I mean there are no lights, nurses, or even a clock on the wall. I suppose this makes having to light the corridors a bit of a non issue for DP Joseph Biroc (Blazing Saddles). Carol finds and sneaks into Glenn’s room and finds that he has grown exponentially. He lies in a frustrated type of slumber dressed in his underwear on a large pile of bedding. He appears to be dreaming as Carol screams in terror then collapses. We are shown some flashbacks as Manning dreams. He dreams of the Korean War and of courting Carol. After she awakens she is told that Glenn will keep growing until he dies since his heart cannot support his size. Manning also awakens and starts to go mad as he finds out about his growth.

It seems that only Carol can get through to Glenn as the Doctors try to deal with his bone cell growth or something like that and try an attempt to stop it. Gordon, keeping production costs low, manages to make TACM a fun B picture. Langan provides the anger, frustration and bears the pain and anguish (sometimes he does come across a bit whiney and overbearing) with his thoughts on the ironies and peculiarities of life and the universe. With Carol, he waxes philosophic and I love the deep resonating differences in the vocalizations between him and Carol. As he grows he becomes more deranged but it seems he is also becoming lucid and clear. He goes from zero to sixty in 10 seconds flat. “I don’t want to grow anymore!” he shouts as he gets up and storms off. In true Gordon fashion, though, everything else in the picture is treated with drive-in movie aplomb and giddy ridiculousness. Humor is also injected by Gordon as a truck driver is delivering a large amount of meat and is told that they are keeping a “Giant” locked up. His reaction is priceless. 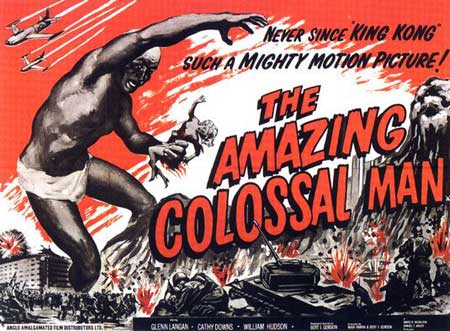 “They call this living!” says Manning as he reads a newspaper about him surviving the blast. He feels like a freak, a clown and despises his “adjustable sarong.”  Some of the dialog is just perfect B movie hokum. “I’m not growing! Your shrinking!” Also, Gordon’s film is hopelessly silly and has some very shady and backwards science increasing the cheesy quotient to levels of corniness beyond measure. There are half assed explanations using cardboard cutouts of a human’s circulatory system and even after being told what is happening, Carol stills asks: “How is this possible” or “Why is this happening?” Huh? I thought the Doctor dude just explained everything. But these are some of the reasons that TACM really works as a more hammy counterpart to the headier, more dynamic and philosophical “The Incredible Shrinking Man.” Gordon’s movie is another good example of the old “man at the wrong place at the wrong time” convention and turns Manning into someone we can (almost) relate to. Langan is great and Cathy Downs, though a bit too dull in spots, is still good opposite Langan. 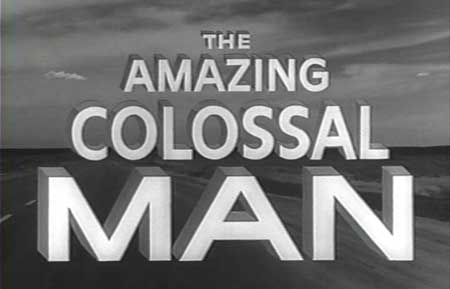 The supporting cast are all very capable but completely unconvincing with the scientific babble but it’s fun to watch and listen to. I had a big grin on my face the whole time while re-visiting this. The action then moves along as the Doctors find a way to stop Manning’s growth. But as they do or “Just as we had the problem licked!” Manning disappears. Yeah, just like that, they lose a 60ft half naked dude. It appears he decided to visit Las Vegas in his delirium and the gang all hop into a couple of helicopters to track him down. I particularly love these scenes as they search for Manning since it is all very tongue in cheek and fun. We get the obligatory News guys behind desks with giant microphones, soldiers jumping out from trucks, people panicking and when a couple of drunks almost run into Glenn in the middle of the road, you know more mayhem will ensue. They find Glenn and he’s none too happy as he is chucking trees at passersby and dodging bullets. Will they get to Glenn in time to give him the injection he needs? Will Glenn shrink back to his normal size? Will Glenn learn to finally chill out? Will Glenn finally get clothes that fit him? Check out this fun atomic age B classic and find out. 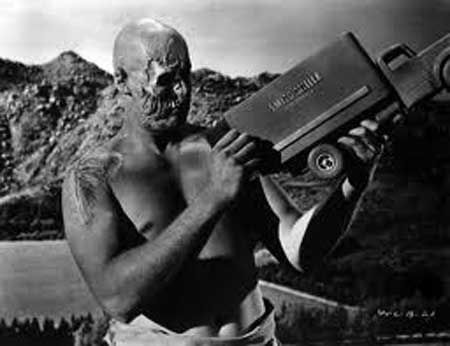 “The Amazing Colossal Man” will not go down in history as AIP’s best B picture but it is indeed a step above other genre flicks of the day. The story in parts can be moving and even intelligent but the reason we tune in is to see Bert I. Gordon deliver a like-able and suitable time filler of a sci fi nature. He delivers the goods and with the strength of Langan’s performance, entertains us adequately. The giant hypodermic needle and Hoover Dam scenes are NOT to be missed. One caveat I have is the abrupt ending. It almost seemed as if they wanted to end the film on a very fast note and it felt a bit rushed but it’s still works in the long run. The film can be frightening with it’s atomic age messages and metaphors but Gordon never takes his eyes off of the prize and it is to showcase some of the brilliant (yeah, it’s a tad dated) effects. They still hold up if you know what to expect going in with a film made in the late 50’s. Many feel this film is actually Gordon’s crowning achievement but I think it was a warm up exercise for bigger and better things. Get it? I said bigger…oh never mind. Check out “The Amazing Colossal Man” on a late Saturday night along with some other movies of it’s ilk and have blast. Just avoid a plutonium one. Recommended! 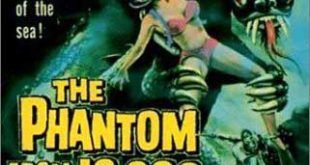