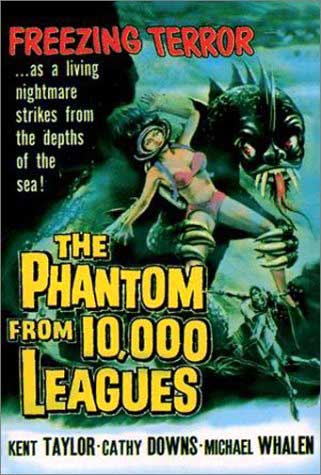 SYNOPSIS:
“An unusual radioactive rock on the sea bottom mutates the ocean life into a horrible monster. When charred, radioactive bodies begin to drift ashore a scientist and government agent investigate the phenomenon, and it’s connection to a local marine biology professor.” (courtesy IMDB)

REVIEW:
As the fifties grew to a close so did the era of the giant radioactive beast. Spawned from the nuclear fears stemming from World War Two, the movies saw dozens of monsters due to one of the popular catch words of the time: Radiation! By decades end, just about every manner of beastie had been seen. The major studios had lost the inclination to finance such projects, and gradually re-focused their attention on new trends like nudies, bikies and Gothic horror. That is not to say that movies with critters didn’t exist. It’s just that, more often than not, it was left to the little guy, the independent producer or film-making rookie to unleash such monsters. The Phantom From 10,000 Leagues (1955) is one such film. 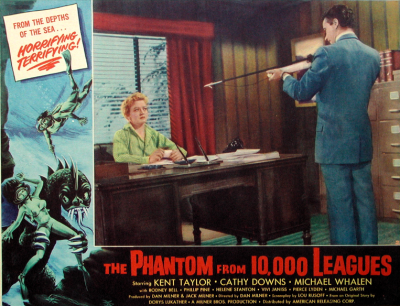 Firstly, I’d like to point something out. For the record, the figure in the title of Jules Verne’s 20,000 Leagues Under The Sea refers to the linear distance covered by the Nautilus from the time Captain Nemo takes Ned Land, Aronnax, and Conseil aboard to the time of the submarine’s apparent destruction, and not to the depth at which the Nautilus cruises. In fact, no submarine could cruise at such a depth, at least not on this planet. A league is a rather imprecise unit, defined variously as anything from roughly 2.4 to 4.6 miles, but even the most conservative definition yields a value for 20,000 leagues that is an order of magnitude greater than the total diameter of the Earth. I bring this up because of people like the makers of The Phantom From 10,000 Leagues. Not only do they proudly trumpet their ignorance of just what a league is with a title like that, but they go on to attach it to a movie in which the titular monster inhabits a kelp bed which can’t possibly be located more than about fifteen feet below the ocean’s surface. 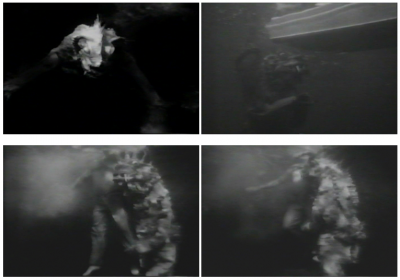 Which brings me to my second point – if we can see it, then it isn’t actually a phantom. It’s more like The Creature From The Black Lagoon‘s (1953) hillbilly cousin. Though it is portrayed by the standard man in a suit, it really can’t be characterised as a Gill Man. Vaguely Humanoid Sea Serpent might be the best description. It’s a lumpy thing, with a barrel-chested body, short, squat, flipper-like limbs, and a somewhat bovine head adorned with a row of backward-curving horns running down the mid-line from snout to cranium. All in all, it looks like the kind of thing that might turn up in an ambitious high school play of Saint George And The Dragon. This creature is among the very first things we see, too, as a fisherman in a little rowboat accidentally snags it in his net, and is pulled to his death beneath the waves. Strangely, his body will later be described as having suffered massive radiation burns rather than the sort of damage you’d expect a sea monster to inflict.

So, in short, it’s not a phantom and it’s not from 10,000 leagues, but in every other aspect the title is completely accurate – it’s definitely ‘From’. There’s another angle to The Phantom From 10,000 Leagues which I haven’t addressed yet. Since we have both a square-jawed scientist and the low-wattage daughter of a supposed genius, there can be no question but that a romance will develop between the two of them. When it does, it turns out to be even more awful than most of its fellows from similar movies of the day.

Screenwriter Lou Rusoff’s dialogue is wretched from beginning to end, but he saves some of his most painfully inane work for the courtship between Ted Stevens and Lois King. Their cozy little subplot also enjoys the distinction of featuring practically every cliché in the book. The Help-Me-With-My-Zipper scene, the I’m-Right-Outside-The-Bathroom-When-You-Come-Out-Wearing-An-Indifferently-Draped-Towel scene, the Piercing-The-Emotionless-Façade-Of-The-Scientist scene. It would be plenty bad enough even with a pair of actors much more capable than Kent Taylor and Cathy Downs portraying it. With those two as the romantic leads, the subplot is simply horrendous. Of course, that just means it’s of a piece with everything else about The Phantom From 10,000 Leagues. 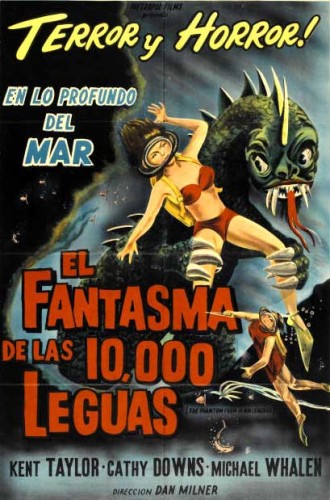 Can you imagine trying to sit through this (as the first-run audiences did) on a double bill with The Day The World Ended (1955)? Anyway, please join me next week so I can poke you in the eye with another frightful excursion to the backside of Hollywood, filmed in glorious 2-D black & white Regularscope for…Horror News! Toodles! 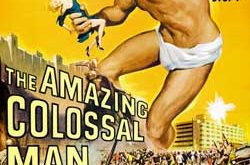