HIDDEN IN THE WOODS Descends into Madness with News of Release 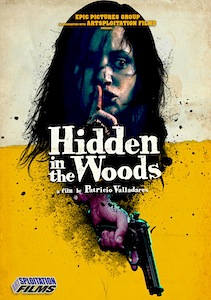 HIDDEN IN THE WOODS THE FANTASIA AUDIENCE FAVORITE INVADES YOUR HOME ON DVD FROM ARTSPLOITATION, VOD, AND ON VHX HD VOD, TUESDAY, SEPT. 17!

“The screenplay is the best thing about the film as a work of perverse art…Valladares and Andrea Cavaletto admirably avoided falling into the clichés of this kind of flick. I never knew where things were heading, and that kept the material, as well as the film’s power, constantly fresh…” – Roy Frumkes, Producer and Writer of Street Trash and Document of the Dead

One of the most controversial horror films ever to emerge from Latin America, Hidden in the Woods is 21st century grindhouse horror cinema at its most shocking.

Deep in the Chilean countryside, Ana and Anny live with their deformed brother and are subject to their father’s perverse and sadistic whims. After a dispute with the police leaves a wake of death and mutilation, they flee and find refuge in a remote cabin hidden from society. Meanwhile, a crime lord, convinced they have stolen the massive stash of drugs their father was hiding, sends a violent pack of thugs to find them.

Based on a bizarre true story and not for the faint of heart, Hidden in the Woods (currently being remade by actor Michael Biehn [The Terminator, Grindhouse] in the U.S.) features extreme violence, prostitution, sexual assault, buckets of blood and even cannibalism.

Hidden in the Woods tramples your way on DVD and VOD on Tuesday, Sept. 17. For those craving their terror in HD, this descent into terror will be available via VHX at: www.hiddeninthewoodsfilms.com. Fans buying this online, DRM free download will also have the option to access all the wonderfully grisly bonus features included on the DVD and a special, exclusively online bonus feature: Toro Loco, Patricio Valladares’ raunchy and grimy grindhouse flick.

• Behind the Scenes Featurette

Tags Hidden in the Wood