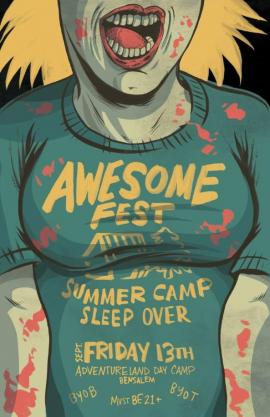 On Friday, September 13th, The Awesome Fest will take over Adventureland Day Camp in Bensalem for the 1st ever Summer Camp Sleepover, an overnight horror film festival outdoors in the woods! From Dusk ‘til dawn, The Awesome Fest will screen 6 movies while offering the usual summer camp activities as well as fishing, rock-climbing, campfires, food trucks, horror themed vendors, marshmallow roasts, scary stories, as well as many surprises! “Campers” are even encouraged to BYOB and BYOT (bring your own tent)!

“I firmly believe this is one of the most exciting events we’ve ever created” said Founder/Artistic Director Josh Goldbloom. “I spent the majority of my youth watching every horror film I could get my hands on well into the early morning. Now I get to do this in the woods at a summer camp, with hundreds of people that share my enthusiasm for the genre. I’m beyond excited!”

“When Josh said ‘How about an overnight at a summer camp…,’ that was all we needed”, states Scott Weinberg, programmer for the festival. “It went from an all Friday the 13th festival to an all-retro-fest to a retro-fest combined with three or four new horror films that we really like. If you’re planning an all-night six-movie horror film mini-festival, you should try to get something old and something new. And a cool location. And great people. At night. Outside.”

Tickets for the event are $23 and go on sale Thursday, August 15th at noon. They can be purchased via Ticketfly – www.ticketfly.com/event/350599

Friday The 13th (1980)
Camp counselors are stalked and murdered by an unknown assailant while trying to reopen a summer camp that was the site of a child’s drowning.

Slightly disturbed and painfully shy Angela Baker is sent away to summer camp with her cousin. Not long after Angela’s arrival, things start to go horribly wrong for anyone with sinister or less than honorable intentions.

Jug Face tells the story of a pregnant teen trying to escape a backwoods community when she discovers that she may be sacrificed to a creature in a pit. The entity in the pit requires a life for keeping the community safe. The face of the person to be sacrificed is crafted onto a ceramic jug. When ignored, the entity unleashes an evil onto the community. Now no one is safe as tragedy befalls each member one by one and they soon realize that the pit wants what it wants.

Two former baseball players, Ben (Jeremy Gardner) and Mickey (Adam Cronheim), cut an aimless path across a desolate New England. They stick to the back roads and forests to steer clear of the shambling corpses that patrol the once bustling cities and towns. In order to survive, they must overcome the stark differences in each other’s personalities—Ben embraces an increasingly feral, lawless, and nomadic lifestyle—while Mickey is unable to accept the harsh realities of the new world. Mickey refuses to engage in Ben’s violent games and longs for the creature comforts he once took for granted. A bed, a girl, and a safe place to live.

When the men intercept a radio transmission from a seemingly thriving, protected community, Mickey will stop at nothing to find it, even though it is made perfectly clear that he is not welcome.

After an impressive festival run in 2006 & 2007, including Toronto, Sitges, and SXSW, Director Jonathan Levine’s (Warm Bodies, 50/50) directorial debut was never released in the United States. The film has been #1 on Bloody Disgusting’s list of the best unreleased horror films for the past 4 years. Now, thanks to Radius-The Weinstein Company, the film will finally see the light of day after 7 years!

A group of high-schoolers invite Mandy Lane, a good girl who became quite hot over the summer, to a weekend party on a secluded ranch. While the festivities rage on, the number of revelers begins to drop quite mysteriously.

A former summer camp caretaker, horribly burned from a prank gone wrong, lurks around an upstate New York summer camp bent on killing the teenagers responsible for his disfigurement.

The film was one of the first from Miramax Films: Harvey Weinstein produced the film and Bob Weinstein was a co-writer.[2] Jason Alexander, Fisher Stevens and Oscar winner Holly Hunter all made their motion picture debuts in this film.

ABOUT THE AWESOME FEST
Established in 2010, The Awesome Fest has show-cased well over 150 Philadelphia Film Premieres in some of the city’s most unique venues and non-traditional outdoor spaces. The citywide free summer series is recognized for its themed events and innovative approach to programming. It has quickly become one of Philadelphia’s most popular outdoor attractions.

Situated on almost thirty-five acres, Adventureland Day Camp is comfortably nestled between the woodlands of Bucks County and the banks of the Neshaminy Creek in Bensalem, PA. An A.C.A. accredited camp, Adventureland has been owned and operated by the DeVicaris family for 51 years. The camp has built a reputation of quality and excellence in the greater Northeast and surrounding communities by providing a superior Day Camp program for children and young adults.

Camp gates will open at 4pm with the screenings set to start at sundown. Each “camper” will receive an itinerary and map of all the events upon arrival.