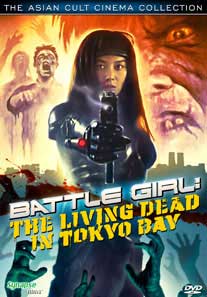 A meteor lands in Japan and the fallout creates a “shield” around Tokyo, encasing the city in a foggy darkness. A state of martial law is declared. People are in a panic as violent crime and corruption spreads throughout the region and punk gangs are ruling the streets. As if things weren’t bad enough, a chemical reaction from the meteor unleashes a deadly virus and now the dead are coming back to life as flesh-eating zombies! A female soldier is asked to don a “Battle Suit” to vanquish the flesh eating foes. It’s gruesome, campy sacrifice fun, filled with wild special effects! Extras: New interview with Director Kazuo “Gaira” Komizu

Battle girl, Infra man, terminator boy…. I love any Asian film that has a super hero kind of twist thrown into it. I actually wasn’t all that too familiar though with the term Battle girl, so I did some digging. The original moniker comes from an arcade game. In fact, a quick wiki quote and we should be squared on that:

Battle Girl is an arcade-style top-down shooter computer game for Mac OS and Windows, released by Ultra/United in September 1997. Its allure is its high-pace action, vector graphics and techno music.

Now the original film was released in 1991 under the Asian title of Batoru gâru: Tokyo crisis wars, though this re-release is a much improved version and transfer for die hard collectors. It also contains newly removable English subtitles, which I’m gonna assume the original lacked. The film directed by Kazuo ‘Gaira’ Komizu is a nice blend of camp, zombies and one on one battles. It does lack alot of the modern gizmos and gore effects that we’ve come to expect from films like Tokyo Gore police, but it seems to be in line with the level of FX making of its time. Just note that it is no real gore fest. Which in some cases may be a plus or minus depending on your perspective. Again with the zombies we say….. yes, Asian films love their zombies and there’s plenty of them here.

Proof of that is found in other films like Onechanbara, Wild zero and Rika…just to name a few. Though I’d say that American films are getting pretty close to catching up these days on the zombies. In simple form, a meteor lands in Japan which causes a blue mist like “shield” as they call it to engulf the city. The local enforcements waste no time calling martial law and rounding up survivors. Like in “Escape from New York” fashion, gangs assemble on the outside to battle or keep from being quarantined. The gangs are more punk style than anything rather than say Mad Max. Now if I didn’t mention it, a chemical release causes the zombie-making creating an environment of a encased zombie village of sorts. The local enforcements are corrupt and have other plans. 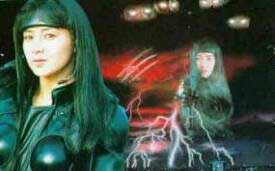 Now your asking yourself, where does Battle Girl come in? Well K-ko (Cutie Suzuki) a soldier, is asked to adorn a new battle suit created to withstand certain attacks in which she is given instructions to round up any survivors. The suit is pretty sexy with its bondage black leather completely equipped with kill gadgets and accessories. In fact somehow it also seems to give her enhanced strength. Now the clincher comes in the form of the general who sends out a band of enhanced freaks to hunt her down and kill.

He calls them the “monsters”. I’m guessing from the story line that he wants to use these zombies for his own army, so the very protector he sent out is ordered to be destroyed. Nice eh? These monster characters are fun to watch as they adorn sort of thrift store outfits complete with low cost metal pieces. 1 of them even seems to have a relationship with “Wolverine”. 4 total, they approach her one by one in what is some of the weakest fight choreography I’ve seen on screen.

Remember the old days of Electra woman and Dyna girl? Well the confrontations are pretty close to that. Yep that’s where the camp comes in. I’m guessing though the film budget was pretty low as the talent is kept minimal. Now I’m sure fans will have mixed reactions, especially if they are expecting a certain look and production value. However these films are still fun to kick back and watch if not to make jokes at then to look for weak points to compare notes to. Battle girl is one I could see whipping out during a gathering to demonstrate the production level of some Asian films back in the day. For that its makes it a good one to own to rest firmly on your Asian horror meets sci-fi shelf. Kudos to Synapse for dressing this one up and giving it a proper release that’s watchable!