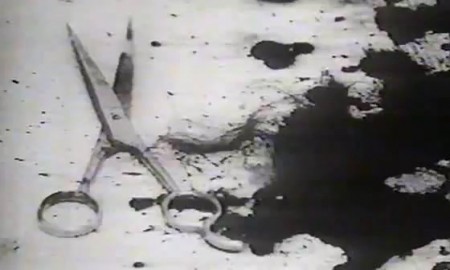 Teenage Babylon presents the aftermath of three teenage suicides through the medium of what purports to be 1960s vintage black and white police file footage. The film’s haunting images, evoking teenage love gone wrong, are counterpointed by a series of saccharine torch songs, celebrating falling in love and the end of a masquerade. Through a kind of bathetic synthesis, the dialectic of Eros and Thanatos, love and death, is consummated in the ‘morgue’ of the forensic archive.

Retro-soaked in black and white footage, jittery and contrasted, this little 14 minute piece works its way nicely over a subtle old time melancholy piece playing while the frames uncover a recent tragedy (note: song title “When I fall in Love”). The film being an 80’s product was obviously film treated for a more classic presentation style. 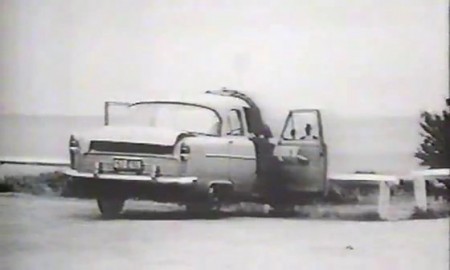 A single car sits quietly while we pull in unveiling the prior events. A suicide, a gun pointed point blank, and a corpse mark the beginning. It is clear that the piece was intended to showcase teenage tragedies for what they are, tragic. 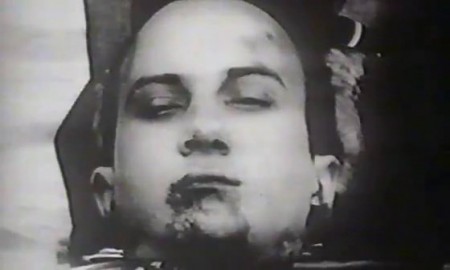 A girls corpse lay dormant in a field obviously a victim of drug abuse.

Like the details leading up to the crime scene we are shown pieces that tell small stories of tragedy and violence now tranquil and still…the aftermath. Even when we are shown a blood splattered sink, the piece takes its time to move onto the real story which is tub soaked in blood containing a teenage suicide. If the point here was a certain beauty in death then Graeme Wood surely has taken that into consideration.

Graeme Wood knew that this short would make impact on visual presentation alone. I wasn’t  sure if it was intended to send a message about the absence of life that remains once a teen death has occurred. The piece is quite gruesome in retrospect, but toned down due to a conflict of pleasant music and careful framing. The contrast sometimes almost presents many of the elements in an abstract form revealed only by larger framed shots.

Haunting are the images of investigators who stand silent looking over the deceased in their crime scene state. Details such a shoe, a needle, a couple laying solemn against a sandy beach, an evidence bag….all give their confession to smaller details. Though the presence of bugs over the deceased pretty much say it all.

“Teenage Babylon” is in some ways simply a perfect storm.