Half Zombie Half Demon DEAD BEFORE DAWN Comes to Bluray Sept 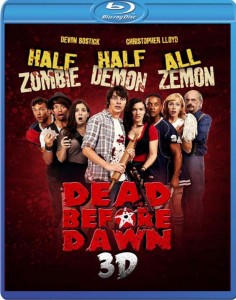 Zombie lovers, get ready for a new type of zombie – ZEMONS! An ancient curse that puts a whole new spin on the horror genre, Dead Before Dawn slashes onto Blu-ray Disc, DVD and Digital Download October 1 from Gaiam Vivendi Entertainment and Wango Films. Shot entirely in live-action stereoscopic 3D, the feature marks director April Mullen as the first and youngest female to direct a film of this kind. “Fresh, funny and a little bit of blood” (Fangoria), Dead Before Dawn stars Emmy Award® winner Christopher Lloyd (Back to the Future), Devon Bostick (Diary of a Wimpy Kid Trilogy), Martha MacIsaac (Superbad), Brandon Jay McLaren (The Killing), Brittany Allen (The Rocker), Kevin McDonald (The Kids in the Hall), Kyle Schmid (A History of Violence), Rossif Sutherland (High Life) and Ellen Dubin (Napoleon Dynamite).
Casper Galloway (Bostick) and his college friends visit an occult shop run by Casper’s grandfather (Lloyd) and accidentally unleash an evil curse, causing people to kill themselves and turn in to Zombie Demons, aka Zemons.  Armed with a slew of homemade weapons and a Winnebago, the college kids race through the night, killing Zemons and fighting time while frantically searching for a way to reverse the curse within 24 hours.  As the Zemon army starts to overpower the team, Casper finds himself with no choice but to face his fears and become the unlikeliest of heroes.
Packed with bonus features, including behind-the-scenes footage, a “making of” featurette and bloopers, Dead Before Dawn will be available on Blu-ray and DVD October 1 for the suggested retail price of $19.97 and $14.93, respectively. In addition, a 2-disc combo pack including a 3D Blu-ray and 2D DVD will be available exclusively at Best Buy. The film will also be digitally available everywhere.

A horde of Zombie Demons, ZEMONS are unleashed on the world after college kids unwittingly create an evil curse. This curse causes everyone that they make eye contact with to kill themselves and turn into ZEMONS!  Now, they only have 24 hours to reverse the curse.  Armed with a slew of homemade weapons, avoiding eye contact, dodging hicky’s and seducing Zemons, will our heroes be able to reverse the curse? The fate of the entire world rests on their shoulders, or all of humanity will be Dead Before Dawn! 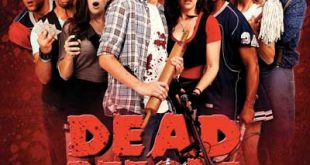