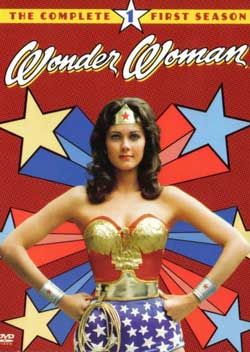 After a dogfight with a Nazi plane, U.S. Air Force Steve Trevor crashlands on an uncharted island in the Bermuda Triangle. Paradise Island is inhabited only by women, and their existence has been kept a secret for thousands of years. Learning of the Nazi threat to humanity, the Amazon princess, Diana, is chosen to accompany Trevor back to the United States to battle the Third Reich. Garbed in a skimpy red, white & blue costume and armed with a magic lasso that forces anyone within its grasp to tell the truth, Diana uses her powers as Wonder Woman to battle the forces .

No one to date has ever come close to the raw woman-power-sexiness of the stunningly beautiful Lynda Carter. I had to do a double take when I looked up the premier date and found that this series debuted in 1975. Indeed a series, the show still piloted with a feature episode TV movie that introduced Wonder Woman and revealed her origin. 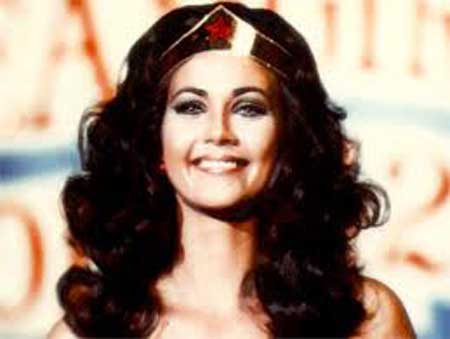 Fan boys were instantly smitten not only seeing this well known DC character come to life, but to also see the character matched so perfectly. She had morals, fighting skills, agility, and a smile that was unmatched on TV at the time. Hell, you had to give credit to any female who was willing to sport those trademark Wonder Woman swimsuit style shorts every episode.

A hit series that ran up until 1979, there were still many viewers who never got to see the pilot film introducing Diana Prince to the world. Living on Paradise Island with her fellow sisters, Diana was living the life of a princess far from the reaches and influence of the world and men. 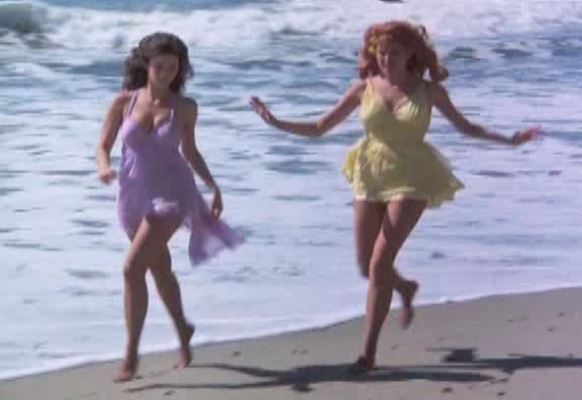 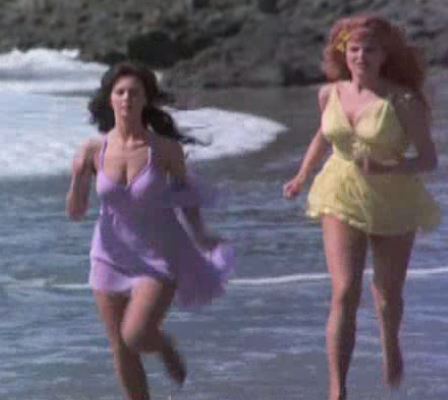 We find out early on that Diana is actually quite old with her mother having lived around the time of the Greeks and Romans, though the island itself created an ageless state of immortality that kept everyone who resides there in a beautiful Amazonian state. The queen (Cloris Leachman) kept law and order while also subjecting the women to maintain their strength thru constant training. This trademark agility is party of what makes Wonder Woman so unique when placed into the mortal world. It also seems to help that they were all trained to deflect bullets with their arm bracelets. 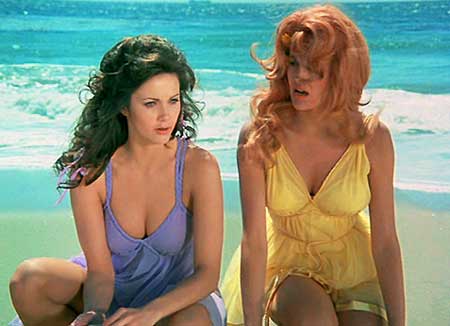 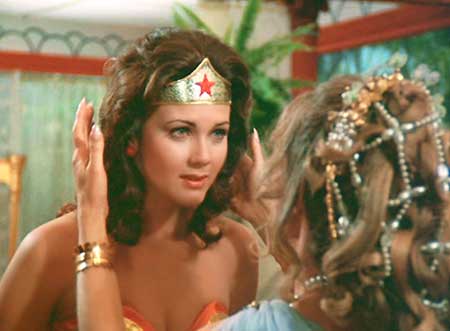 In the first episode, we join a WW II conversation in place that has the Nazis planning to take out a U.S. warehouse that has been developing secret weapons. An attack is set into play as a Nazi war plane heads into the US territory. Pilot Major Steve Trevor (Lyle Waggoner) is asked to take down the plane before it reaches the borders. 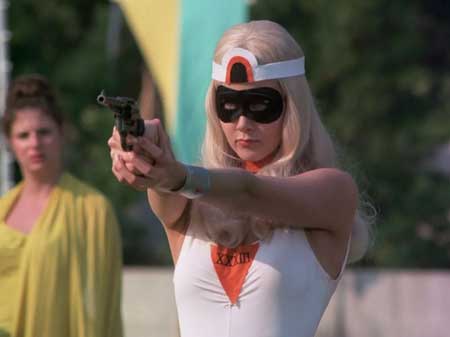 While in combat, both planes are shot down over an uncharted island named “Paradise Island”, with both pilots exiting per parachute. Trevor is shot by the Nazi and then rescued on by a small group of women, one of which includes the majestically tranquil princess Diana. 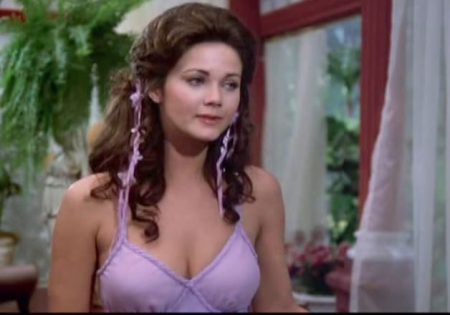 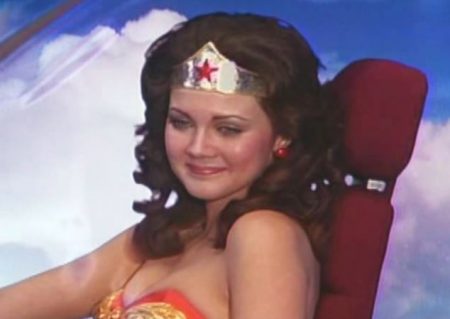 As the pilot Trevor is brought back to care, he is ordered by the queen to be taken back to his homeland using the island’s invisible plane, in fear that he might disrupt the order of life on the island. 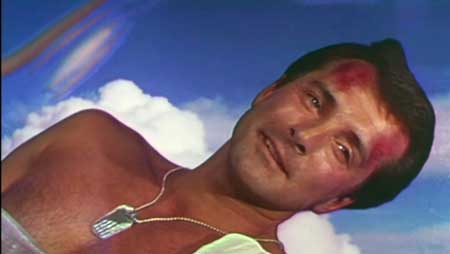 A Olympic style tournament is set into play to determine who is worthy of fulfilling the task. Diana, in disguise wins the tournament against her mother’s wishes and convinces her to let her take Trevor back herself. This begins Wonder Woman’s first introduction into the American way of life. The term Wonder Woman is given by her mother who uses it to describe her great performance and skills. She is also given a custom made red, white, and blue outfit equipped with a magic lasso that forces one to tell the truth upon capture. 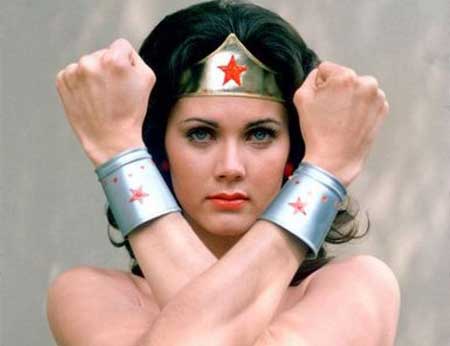 The debut pits the Nazi forces against the Americans in a plot that feels more like a cheesy foundation for Wonder Woman to show her stuff. While much of he military plot line is second to the sheer charisma of seeing Wonder Woman in action, it does introduce Diana to Steve which begins their first encounter. Wonder Woman does defeat the Nazi mole leaving a position open as Steve’s new secretary. Diana takes the job of course. 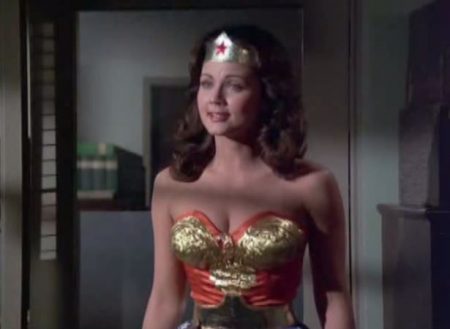 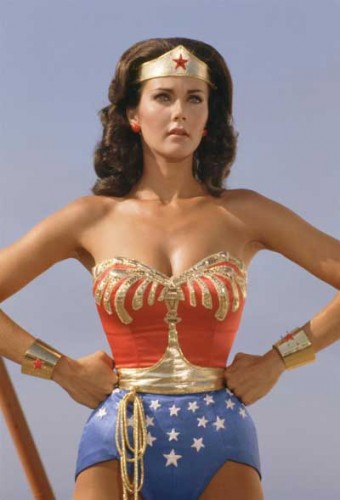 For a 1975 TV pilot, this one still is my favorite portrayal and character realization of Wonder Woman to date. Even with the series wacky Batman-style intro credits, there is not much room for complaint seeing our comic book character embellished with such grace and dignity. Lynda Carter created a hard act to follow. To date there has never been a version introduced the tops her original role.

Rumor is that a Wonder Woman film is hard pressed to go into production, but for now, we’ll just have to wait and see.