Home | A Trio Of Clips From CRYSTAL LAKE MEMORIES

A Trio Of Clips From CRYSTAL LAKE MEMORIES

What is shaping up to be the mother of all documentaries on any film series, CRYSTAL LAKE MEMORIES an incredibly extensive look at the Friday the 13th franchise is gearing up for its big debut on Friday Sept. 13th and Jason fans around the world are waiting and wondering what to expect.

Well, I can help with that a little. Tonight I have for you a trio of clips that show just a little of what we are going to be treated to when the 7 disc set lands in just a few weeks. You ready?

If you want to know all there is to know about this release then read on as the press release tells all:

The Blu-ray/DVD combo pack showcases the extensive feature, which runs approximately 420 minutes. When purchased through the website, buyers will also receive a bonus DVD with nearly 4 hours of extended interview material. The film will be officially released on Friday, September 13th, 2013, via 1428 Films with a list price of $29.95.

Crystal Lake Memories is written and directed by Daniel Farrands and produced by Thommy Hutson, who previously teamed up for the award-winning Never Sleep Again: The Elm Street Legacy. “As lifelong fans, we couldn’t let 2013 pass us by without giving Jason his due,” explains Farrands. “I hope that Crystal Lake Memories will serve as a fitting tribute to one of this generation’s most iconic bogeymen.” 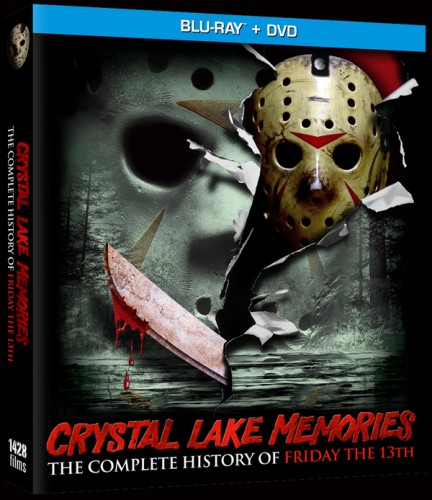