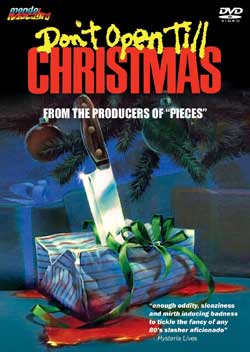 A deranged killer is stalking the streets of London around Christmas killing off anyone dressed up like Santa Claus. Will the police be able to find out who is behind the murders and stop the person before every Saint Nick in town is brutally murdered?

There definitely isn’t a shortage of Christmas-themed horror flicks for viewers (like me) who don’t prefer more traditional fare such as Miracle on 34th Street and the sickening sweet It’s a Wonderful Life to choose from once the holidays roll around each year. Some of them are nothing short of awesome (such as the original Black Christmas and Silent Night, Deadly Night) while others leave a lot to be desired and are pretty hard to sit through (Satan Claus and Santa’s Slay come to mind almost immediately). Don’t Open Till Christmas falls somewhere in the latter category if you ask me. Despite the fact that it has a pretty promising premise and some nasty death scenes I wasn’t that impressed with it overall and thought that it could have been a lot better. 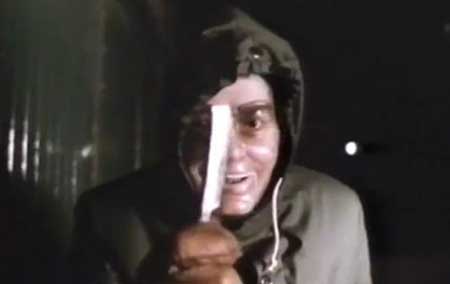 I’ll admit that on paper it sounds like an awesome flick. Some mysterious person is going around brutally murdering people dressed like Santa? Sounds great, doesn’t it? How could anyone possibly mess up a movie with such a simple and cool premise, do you ask? Watch this movie and find out. What could have been a fun, bloody, and just overall entertaining (sleigh) ride instead turned out to be a long, boring mess of a film that falls apart somewhere around the halfway point. While I did enjoy seeing numerous Santas being killed in a variety of vicious ways I thought that the overall story was convoluted and confusing and by the time everything is finally revealed in the end I just really didn’t care anymore. I typically love slasher flicks where you have to try to figure out who the killer is but this movie (along with all the horrible Scream films which forever ruined the slasher genre) is the exception. I really didn’t care who the killer was or why he was doing it, and I cared even less once we get both of these questions answered as his true identity is very easy to deduce and his motive is moronic and pointless. 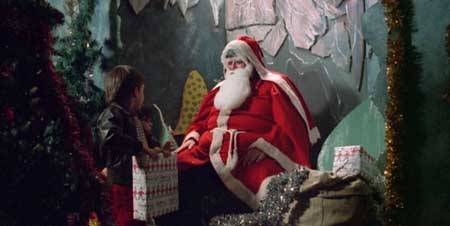 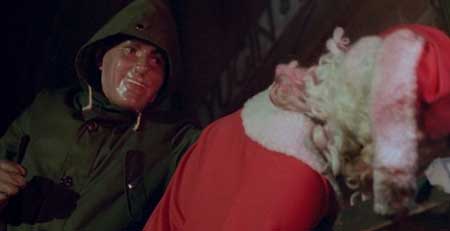 I think that the biggest problem with the movie is that it is just boring. We go from pointless scene to pointless scene over and over again and the only thing that managed to keep my attention was the fact that we are treated to scenes of various people dressed like Santa Claus getting whacked in between (and believe it or not even those got a little redundant and old after a while). I nearly fell asleep at one point and it became pretty much a chore for me to actually finish this film before I just gave up and take it out of my DVD player before all was said and done. I managed to somehow finish it, but to be honest with you I’m not quite sure how I managed to pull off this feat. 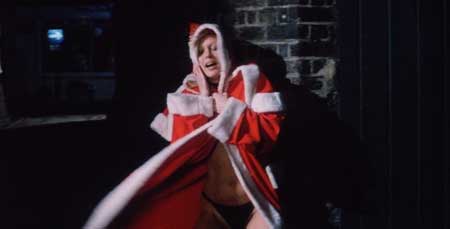 I’m not exactly sure what happened during the making of this movie but it appears at one point that some of the cast members decided to leave the project as one or two of them just disappear without a trace and are never seen (or spoken of) again. The focus seems to switch from major characters to more minor ones as the film progresses as well for some unknown reason, and the results are nothing short of disastrous. I am assuming that there were a number of problems on set that caused massive rewrites to take place after filming had already started which caused some of the characters to get less screen time in the end. At least I hope that is what happened as I would hate to think that the writing was just that bad in general and the final cut was supposed to turn out the way that it did. 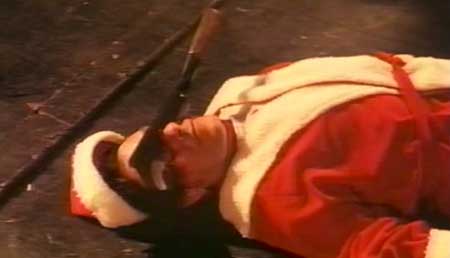 I normally love horror flicks that take place during Christmas, but that isn’t the case with Don’t Open Till Christmas. If you enjoy movies that have a lot of boring scenes with stuffy, unattractive British people (one of which that has hair that is quite possibly the most terrifying and disturbing thing about this entire film) sitting around talking and the occasional shot of someone getting killed then this film is for you. It just wasn’t for me and even though there were one or two death scenes that stood out (the one with the bathroom castration ruled) as a whole this film was pretty lousy. Check it out if you like, but keep in mind that you would be much better off watching one of the many other (and much better) horror-related Christmas flicks available to you.