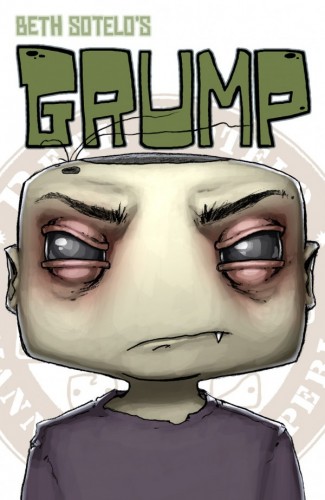 Veteran comic book colorist, Beth Sotelo, renowned for her work on such titles as Michael Turner’s Fathom, Soulfire and Shrugged for Aspen Comics over a ten year span, has developed and introduced her own new original series entitled “Grump”, launching recently on Kickstarter.com with a debut 40-page fully illustrated graphic novel first -offering. A longtime passion project for Sotelo for many years, the creator describes “Grump”:

“Most neighborhoods have that one crazy house. Its wood is rotting and weeds are flourishing. No matter what time of day it is, it remains in the shadows. Maybe you aren’t afraid of that house, but you definitely won’t be trick-or-treating there–just to be safe.

Grump doesn’t realize he is all alone, yet he knows that something isn’t right. Eventually, it takes a series of unusual circumstances for Grump to finally meet some neighborhood kids outside his comfort zone—and soon his world is completely shaken!

“Grump” is created, written and fully illustrated by Beth Sotelo and the Kickstarter for the debut graphic novel is currently live now to pledge support. Incentive packages include PDF copies of the graphic novel, iron-on patches of the “Grump” characters, original hand-drawn “Grump” trading cards as well as “Grump” mini-prints by comic creators Joe Benitez, Keu Cha, Peter Steigerwald, Kizer Stone and Sotelo. The “Grump” graphic novel can be found at the following link:

For more information of the “Grump” Kickstarter, please check www.bethsotelo.com/grump