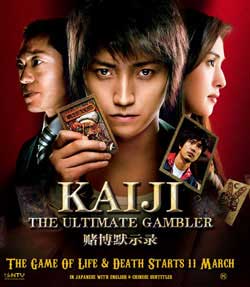 Kaiji Ito (Tatsuya Fujiwara – Death Note/Battle Royale) moves to Japan after graduating from high school. Unable to find a job and frustrated with society at large, Kaiji spends his days gambling, vandalizing cars, and drinking. Two years later and his life is no better. A debt collector named Endo arrives to collect payment. She then offers two choices to Kaiji: spend 10 years paying off his loan or board a gambling boat for one night to repay his debt and possibly make a whole lot more. Meanwhile, the unscrupulous Endo is actually conning Kaiji, believing he won’t come back from his voyage. Kaiji is then up for the night of his life……

This Asian thriller really takes a unique look at manipulation, power, control and the taking advantage of the poor and needy. The film begins pretty straight forward with the ones in power proclaiming how they can get a massive underground project done using little funds, and little time. This segues into Kaiji who is down on his luck working a day job that pays little and is at the mercy of life and a hand dealt in all the wrong directions. When he attacks a nearby car, a woman Rinko Endo emerges that takes him back to her office and offers him a chance to make good on his career, his luck and a defaulted loan repayment that he co-signed on.

When Kaiji arrives at the designated location, he finds himself in a room full of men who share his situation….debt. The movie centers around game playing that uses chance against riches. The winners get an instant opportunity to repay their debts and walk away a rich men. The rest …the losers find themselves branded and placed in a underground work environment that has them working off their debts with literal slave labor. They are enticed with expense relief objects that grant them momentarily satisfaction but which is also part of the elaborate plan to keep them longer than they anticipated. The whole she-bang seems to be orchestrated by a rich tycoon named Yukio Tonegawa who cares little for the players lives and more about the game itself.

Kaiji takes a chance and signs up for a 2nd game called “Brave man road”. Him and a handful have to endure fear inducing challenges that offer more riches at the cost of their lives if they lose. Meanwhile, the rich and indulgent watch from the comfort of TV monitors, make bets and enjoy their lavish lifestyles fueled by money and self satisfaction. The game that is played consists of a simple girder that connects between 2 high rise buildings. The men must deal with their fear of heights, their sanity and the will to make the crossing without falling. An added bonus of electricity makes sure they don’t grab and hold onto the girder with their hands. This moment is the most dramatic of the film that pits the men against a vertigo inducing height that would be hard for any person to face. The scene is enhanced with what some might say is “over acted drama” but is also the film’s highpoint of emotion. Oh, ya……. it doesn’t help matters that it also starts raining.

The vibe of this film really is about games ending on an intense card game against Tonegawa himself. The card game is an odd traditional game which is figured out easily enough by draws on strategy and calling the opponents bluff. At the corner of everything is always a huge cash prize that draws on the temptation of winning and the promise of financial freedom.

Kaiji is played by Tatsuya Fujiwara and is the main focal point of the movie. There is a bit of a “root for the underdog” approach to this film that pushes it into the league of popular films such as “Rocky” and “Vison Quest”. Kaiji was directed by Tôya Satô and spans a full 130 minutes. The film is also based on a popular manga series that spanned over 26 episodes.

“Kaiji: Ultimate Gambler” offers a message within that promotes others to enjoy life and find reward. The path of course being the preference rather than ending up in a life of poverty, debt and dead ends. At the same time, it demonstrates the will of the underdog and overcoming one’s roadblocks in life to rise above. A truly smart and touching film that delivers one first rate thriller. Great film!