Home | Sterling Entertainment Swings Into Action with EMPIRE OF THE APES

Sterling Entertainment Swings Into Action with EMPIRE OF THE APES 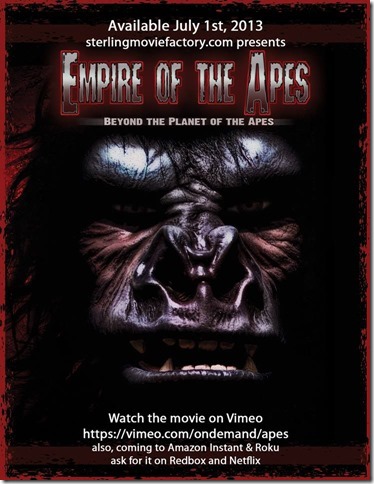 Sterling Entertainment is proud to announce the release of ‘Empire of the Apes’ which is now available on demand through Vimeo: vimeo.com/ondemand/apes

‘In a distant galaxy, on a burnt out world, three escaped female convicts crash land on a primitive world inhabited by a race of warlike apes. They fight for survival as the humanoid apes fight for their possession, body and soul. A daring escape is their only way out. Hot on their heels are the blood-lusting gorillas and a prison warden bent on their return to the prison ship they escaped from. Treachery, alliances and battle awaits the fighting factions. Who will survive on a planet where Apes rule and humans are only breeding stock.’

‘Empire of the Apes’ has reteamed independent horror pioneers David S. Sterling and Mark Polonia for the first time in almost a decade. David Sterling is an unsung hero of the genre. Over the past 20 years he’s produced over 120 horror films; while Mark Polonia is one half of the beloved ‘Polonia Brothers’. He and his late twin brother John are best known for their tenacious low budget fantasy films.

“This movie promises to be unlike any other independent release you’ll see all year. It will deliver angry apes, buxom babes, fun sci-fi, all drenched in crimson red blood” – Producer David S. Sterling.

‘Empire of the Apes’ can be rented immediately through Vimeo: vimeo.com/ondemand/apes

It will soon be available on Amazon Instant, and limited-edition collectors Blu-Ray. 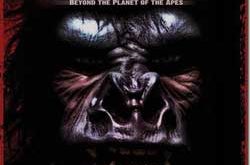